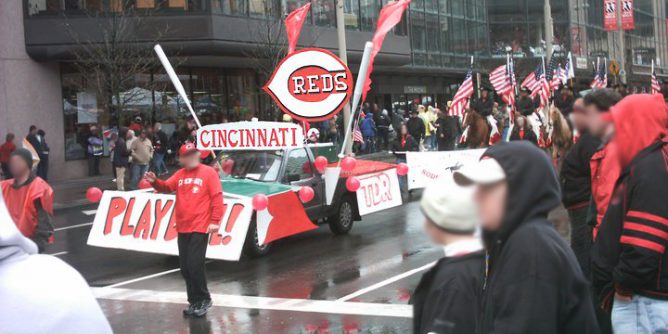 I was never really a big fan or into the game of baseball much but ever since I started working downtown a while back there’s the annual parade and festivities downtown which gives us a great excuse to enjoy some downtime in the office and enjoy the festivities.

Cincinnati has some great history such as Proctor and Gamble (being the big manufacturer of the soap that floats) and the Cincinnati Natural Arts and Historical museums. There is Graeter’s and the big local TV stations. George Clooney was raised around Cincinnati. We have the annual Cincinnati Reds parade also known as the Findlay Market parade. There’s definitely a lot of great history. And when I go out there and see everyone decked out in parade gear all dressed up in baseball gear and bright reds it makes it really fun. I enjoy it.

They also often have free giveaways and food. I remember that a few years back I decided to take an afternoon off because most of the afternoons at work the roads are closed off anyways and I wandered around looking at the sites and sounds and they were giving away boxes of granola bars for free and a lot of the ballpark fare like hot dogs and drinks are also prominently being sold when you’re in the area.

They make a lot of noise during the parade and they have amazing cheerleaders. Anthony Munoz is often seen in the parade, a lot of local high school kids are featured and local businesses and also sponsors of the event. It’s just an all-around great time. I recommend anyone that has not been to Cincinnati to at least come here for a few events and this is one of them. I hope it gets bigger and bigger every year.