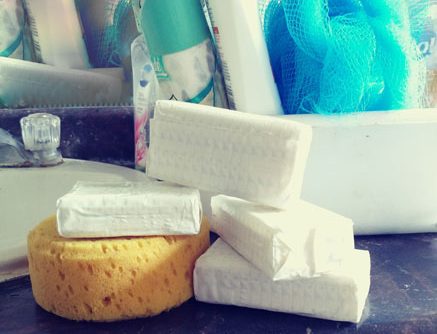 It is so important to use a soap that is compatible with your skin and doesn’t give you allergies.

First what is soap or the process of making soaps called saponification all about? It is a chemical reaction that does a conversion of fat or oil into soap and alcohol by the action of heat in the presence of aqueous alkali such as sodium hydroxide NaOH or potassium hydroxide KOH. These convert and create soap and glycerol. This is called alkaline hydrolysis of esters. Do note that both alkalis are caustic and burn the skin but the final products are usually safe to use.

Some history about soap making:

Locally in 1837 William Proctor a candle maker and James Gamble a soap maker got together to form a company called Proctor in Gamble and then in 1878 the company created a new high quality soap product called Ivory soap that had accidentally mixed a lot of air into its manufacturing to create a very light soap. They marketed it as “the soap that floats” and it became an instant success.

Now back to the topic at hand. Soap making has created a plethora of unique great designer products with many new types of bars shapes and colors, fragrant and soaps claiming holistic soothing properties that may or many not be true. However sometimes new soaps have additional chemicals such as fragrances and other chemicals that can cause an allergic reaction so it is a good idea to also check the labeling of the product. If you do have an allergic reaction sometimes it can take half a day and up to three days or so to go away. You can become itchy, dry or get red spots from using a particular brand or residue from a soap. Another ingredient that you could be allergic to could include sodium lauryl sulfate. Some people also have adverse reactions to triclosan.

If you do have an issue with bar soap, also consider the foaming soaps and liquid soaps as those can also be useful alternatives.

Some interesting soaps to be aware of also are Lava soap which uses pumice to help de-grease and scrub grime but may be too heavy duty for some with sensitive skin. Some people for instance can use lighter soaps like Dove for their skin.

With all the products out there and some that come in easy convenient squeeze bottles, there is surely a product for you. There are even medicated soaps, glycerin soap, soap only for guests, and of course hotel soaps that people seem to not be able to get enough of.