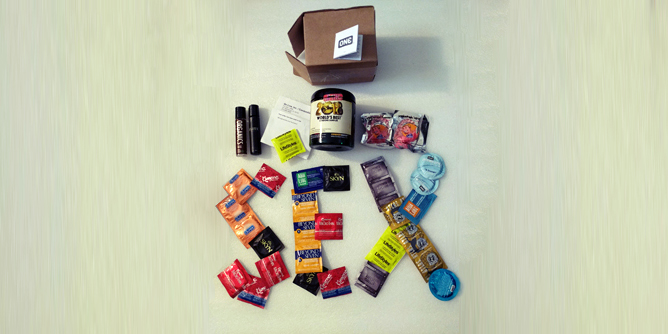 “Getting jiggy with it”.

“Making the beast with two backs.”

“Getting your freak on.”

These are a small sample of some of the slang-lingo terms people used when growing up and describing the act of learning about sex education. I remember there was a time in elementary school that the boys were divided up into one class and the girls were ushered into another room to talk about their periods and we all had a chance to put any questions we wanted into a question jar. “The health talk” or just “the talk”  was given by none other than our sixth grade teacher and our gym teacher. I don’t think we even had the same kind of frank and honest talk in junior high because it was more about terms and anatomy and functionality. Basically by then sex education dealt more with reproduction and functional aspects which included terms like genes and blastocysts and meiosis and mitosis. It dealt not about the emotions behind human sexuality and why we do the things we do.

The true thing about school is that you don’t even learn all the different ways that people actually interact with each other and passion. They don’t teach you about dating theory and relationships and when and how to get together and how to build on female and male relationships, which frankly is a major problem. They teach you about the functional aspects but there really isn’t a class about human psychology. I had to learn some of those aspects through dating books such as David DeAngelo’s material and things for guys about game theory from books that included authors with names such as Mystery or dating books created more for the female perspective such as by Leil Lowndes. Society has really evolved and it wasn’t recently until after 2016 when in the U.S. legislation actively recognized LGBT marriage rights and considered them equal although there had definitely been a movement happening that people weren’t always aware of. For instance, online dating was flourishing, Ellen DeGeneres had already “come out”, and Facebook had rainbow overlays you could put on your profile photos to show and voice your support for various sexuality preferences. It became okay to discuss things like this due to openness like Pride Week in our local town and also Will & Grace was changing the way we perceived people, even Modern Family. Even non-mainstream media would pick up articles about a Japanese man who gave birth or of athlete Bruce Jenner turned Caitlin that got people talking.  And that’s what is interesting and fascinating about the last 40 years because discussion and openness about what makes us function as human beings is what we need and not shunning and suppression of natural curiosity to allow people to understand what lets us function as human beings and exploration of natural wants. We are starting to embrace that we are sexual beings even when there was a discussion of what was going on in DC and politics in the last 20 or so years we are breaking the mold of what is considered okay to discuss in a public forum and that’s fantastic because this allows us to be more self aware. A lot of education is structuring us to think in a certain way and certain binary fashion but humans aren’t able to be classified into one thing or another. We can be passionate, creative, passionate, dirty, unbridled and raw.

Had it not been for the news and Internet I think people would still be in the dark about sexuality. Even Playboy magazines and the Sears catalogs were often our only sources of sexual education. Thank goodness these days that we have cable internet, YouTube and various online media for adults. These alternate mediums are light years ahead of embracing that we don’t need to be labelled sexual humans but just humans because to hide this part of us is just to deny the whole part of us. To deny one part of our nature is like hiding our ability to cook, forage for food, our creative ability and also powerful destructive natures. We have each have unique identities that don’t necessarily always have an easy classification although apps like OkCupid do try to incorporate this wide range of human diversity in their filtering algorithms.

This particular article doesn’t deal with all the full aspects of human sexuality but we encourage safe, consensual behavior for mature persons to explore an aspect of our lives often shrouded in secrecy and mystery and confusion. There really isn’t anything that is abnormal or weird other than everyone has their own thing that they like to try.

What we do recommend is that you don’t have to be pressured to do or engage in sexual behavior before you are ready and that you don’t need to wait till you’re 40 to get with a partner but you do need to be mentally mature enough to understand that you have to be prepared for things like STD’s, babies, body odors, odd body positions, and the occasional need to talk and maintain a connection with your partner. All kidding aside when you decide to “engage in coitus” or copulate… Or whatever you decide to call it, it’s very good to tell your partner what you like and if you’re not intending to spend the rest of your waking days taking care of offspring then you should wrap it up. Communication is what intercourse is all about and it’s just one way of telling your partner what you enjoy and that you enjoy it with them.

In this article we also happened to order a batch of items for review. Take a look: 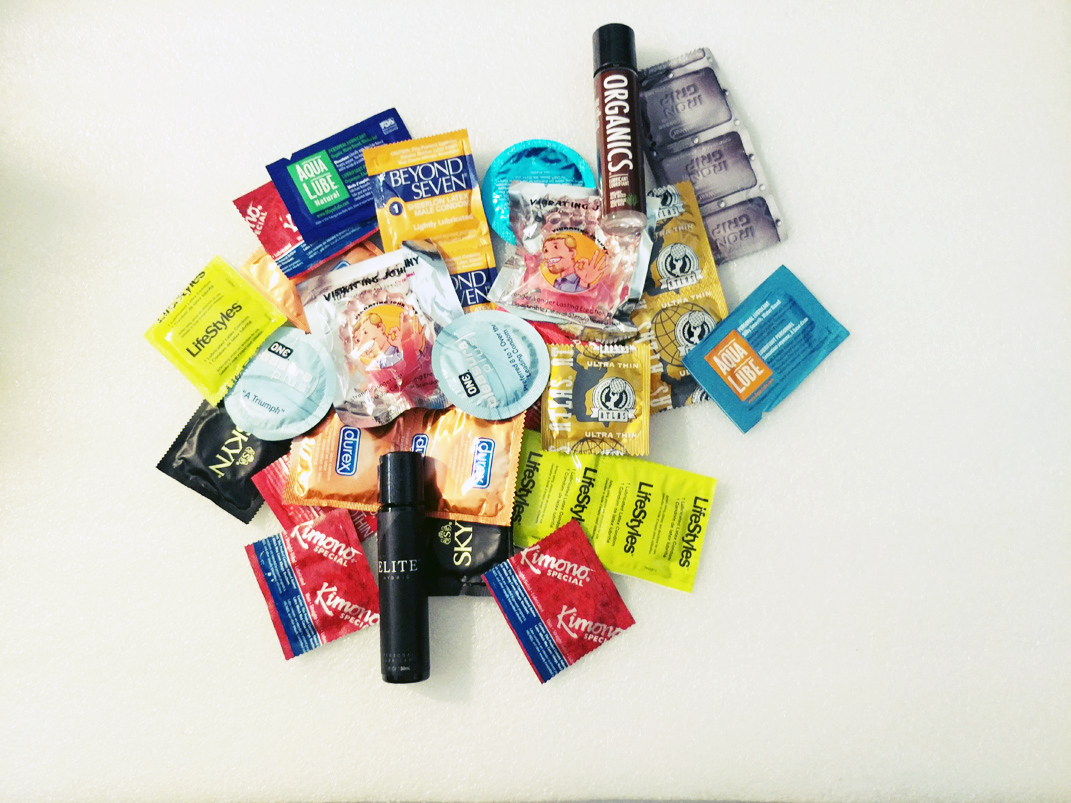 Here we have ordered a packet of condoms from CondomDepot.com and as you can see above there are a large assortment of products that you can use to protect yourself from sexually transmitted diseases (STDs) because you want to have fun but also be safe. As you can see they come in all shapes and sizes and colors for their branding. Not all men will be the same size and stature just as no two ladies will have the same bra size or same kind of anatomy. And that’s A-OKay! We don’t have to be the same because life would be boring like going to the grocery store you see different size oranges and avocados and fruit. Diversity is a natural part of life’s ecosystem. 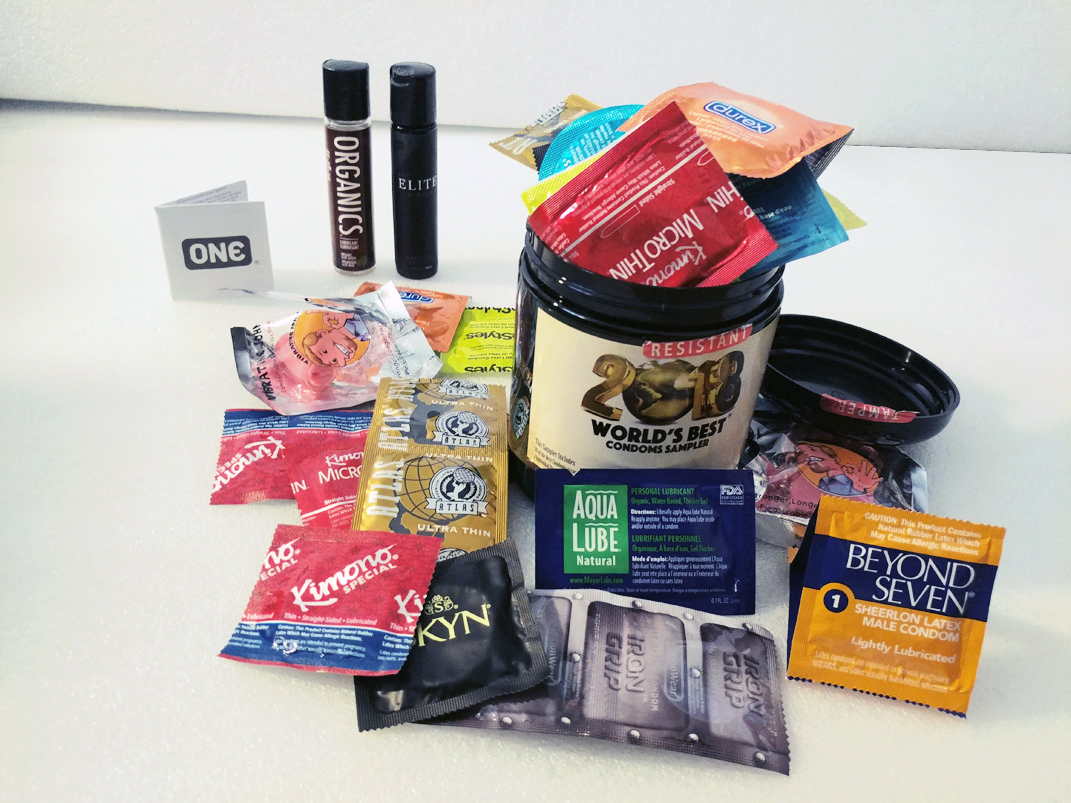 Now the site we ordered from recently had a 30 pack of what they called the World’s Best Condoms from 2018 based on reviews and characteristics. 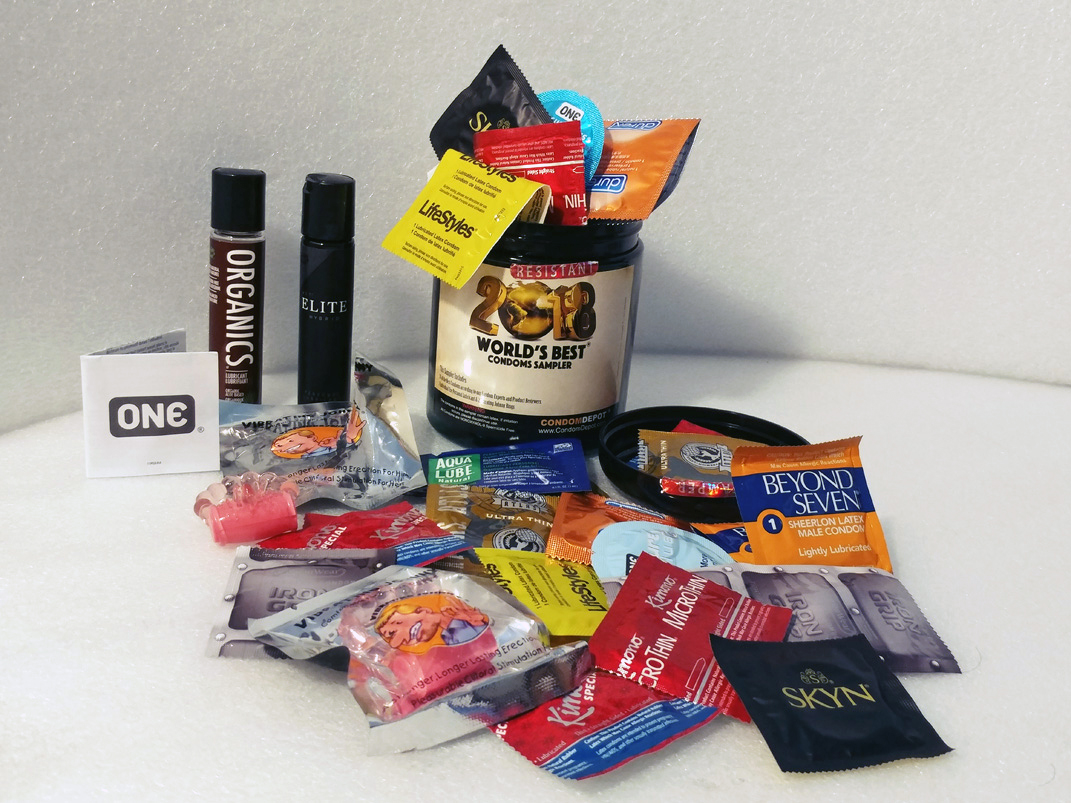 Unfortunately one of the orders did not contain three of the Crown condoms from the site so we had to contact the order support via email to try to get that resolved. Crown is one of those products that are often used by the adult industry and considered to be top notch and also they have a latex product that is pink in color. When considering condoms don’t forget to thing about size and shape and material because just because one brand is advertised or popular on TV doesn’t necessarily mean it is the best for you. You might think that you’re a bad lover or partner when it’s simply you’re using the wrong product that’s too thick or not the right size!

Do note that we do NOT get paid for this review nor were we compensated by their store or staff. We are not affiliated in any way with their store. It was supposed to cost $27 for 30 condoms and although the Vibrating Condoms got good reviews from our test subjects we were sad to learn that there were certain items missing from the order. ** Mainly that the Crowns which were rated to be the best condoms and rated highly by adult film stars were notably missing and we were disappointed since this was the first time we ordered from this company. Sad face. 🙁 Here is a photo of our order that you can clearly count only 27 items were included. 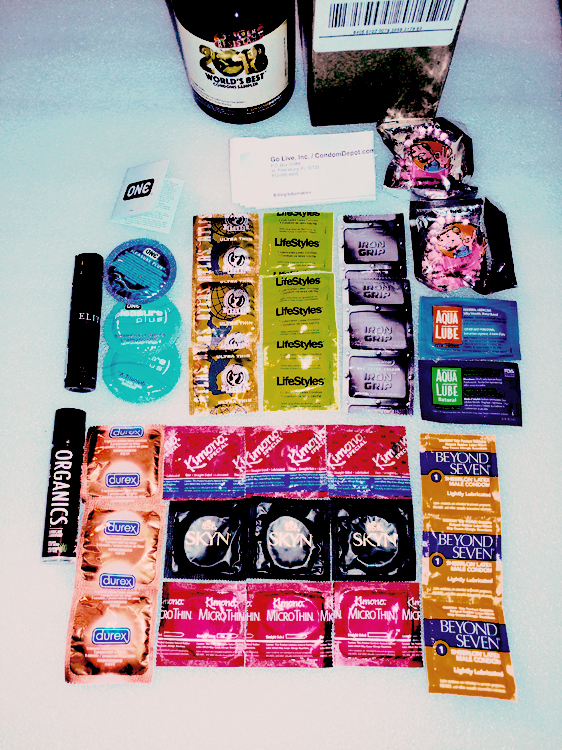 We also ordered two types of lube that was recommended on the site but they aren’t by default included in the World’s Best jar.  One was Organics. One was Elite. It made our order a little under $45… A bit pricey but we wanted to see if it actually made sex better.

The vibrating rings were actually decent. They were quite strong and had the ability to help a person maintain an erection. There is a flip-switch button on the side and instructions. The top of the pink battery part that is in the middle of the silicone ring has a gel type stimulator that is designed to be pleasurable toward female. It looks like a tiny tongue and little extensions but what is nice is that the device is pleasurable for both parties.

This was a fun article to write. Life doesn’t have to be all business and finance all the time.

Remember to have fun, be safe, and be smart.

Stay young and young at heart.

10/11/2018 Update: We received a package with replacement items to our original order so we’re happy. 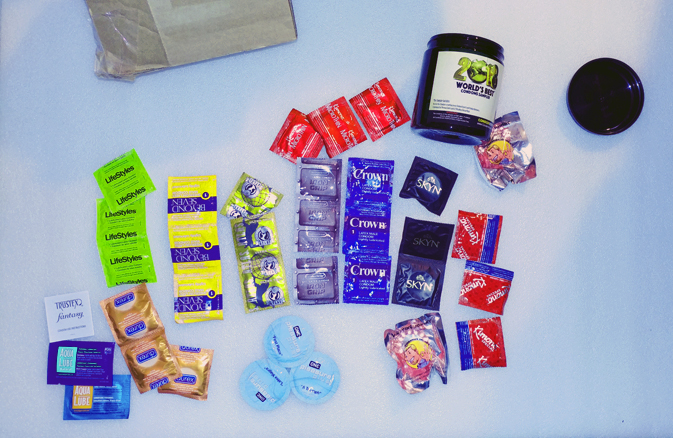 Here’s some of the replacement items they sent us. We got a new bundle minus the lubricants we originally ordered but that’s fine by me. At least we got the Crowns that were missing. They are a pink hued condom that’s actually rated pretty well. They are seen here with the Atlases. They shipped us three Crown that were connected and which can be detached at the perforation. The Crowns did get loose near the end of the night but probably from too much lube application. But we checked out later the material and have to admit that the condom is actually pretty thin and amazingly translucent material for what it is. 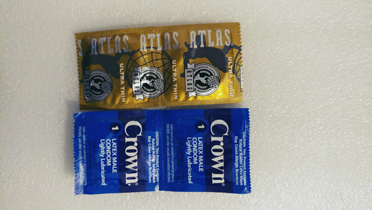 10/18/2018 Update: There was an interesting article that we came across that could make better condoms

The article which was from The Start Magazine dated 10/17/2018 at 9:56 said that there may be a new self-lubricating condoms coming out that help people adopt condoms to help prevent STD’s and unplanned pregnancies. The article states that rather than using traditional oil or water based condoms that the condoms will self-lubricate and become slippery when it comes in contact with moisture such as bodily fluids.
They ran a small sample size of around 30 people and had opinions that people would be interest in using such condoms.
From most people’s experience, proper lubrication is essential to help in sexual pleasure and prevent condom slippage or breakage.
The condom they tested was a new latex type with hydrophilic polymers which attract water. This will be something interesting to look and watch for.

Here are some tips to help make your sexy night better:

You don’t have to be a Don Juan or a Veronica Vixen (just making names up) or whatever you want to call it to be a great lover. You just have to be attentive, eager to please and communicative to your partner. We hope you and your loved one many happy days. And remember to have fun. Toodles.