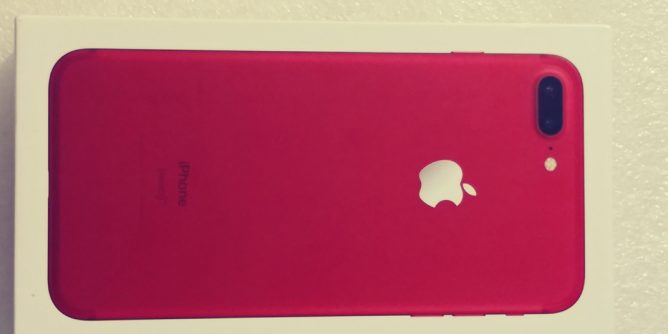 Today we are reviewing a purchase of an iPhone 7 Red 256 GB version from eBay.

A few years ago, probably around 2008 or so, I got my first personal phone. It was a Verizon model flip phone. It could take pictures and I still use it as an alarm clock. A little later my sibling went to the store and upgraded to a newer phone without really telling our Dad. So due to that I had a slightly newer flip phone than the rest of my family on the family plan and it had the ability to access the internet slightly but it was still pretty bad technology-wise because smart phones were coming into play and the first iPhone was released around 2007. It was probably somewhere within 2 years or so that I transitioned to a smart phone around 2010. It wasn’t much at the time. It was an iWireless Kroger phone that uses CDMA technology from Sprint. I think the phone costed around 80 bucks and I paid around $35 for monthly Internet that was about 100 minutes I think and 1 or 2 Gigs of Internet.
I’ve had a few other phones recently including two Android based phones that included a Note model and an LG model but a few weeks ago I decided to diversify my technology. You’ve heard about diversifying your finance and stock portfolio. So you know that there are other asset classes such as metals and oils and bonds. Well, I had been using the same type of technology and had used Linux and Mac and Solaris and DOS and Windows.

In this case I decided to get an iPhone 7 Plus 256GB red edition because first of all I liked the sporty color of it and second cause I wanted to see what kind of technology it had and had seen my friends using it and some of them have better apps.

So a bit about this phone. This is the tenth generation of the phone that was released around September 16, 2016. The are similar to the previous phones but have water and dust resistance, a capacitive static home button and removes the standard 3.5 mm headphone jack. The phone uses a quad-core system chip and 12 megapixel rear-facing camera.
Some didn’t like that they changed to the Lightening connector but it did take some conviction to change to a whole new system and lock out a whole group of consumers.

The interesting about this phone is they released a few different models. For the 7 Plus they have an A1661 that uses a Qualcomm modem which is actually considered to have better reception and speeds than the A1784 Intel modem model. They also have an A1785 model sold in Japan but for the purposes of this review we are just looking at the A1661.

This red color one was released on March 24, 2017 with a Product Red partnership to help raise awareness for its AIDS fundraising campaign. Later it was discontinued when the iPhone 8 came out. It uses iOS 10 which has gotten good reviews and the cameras and batteries have been improved. The device comes in box with a charger, ear buds and a cord.

They have also made the home button hard to replace on this phone.

Over all this is a nice looking phone and has some nice camera features including panorama but its system seems to a bit simpler. I also saw that upon startup it asks you to connect this and connect that account and sign up for this. And there’s no intrusive ads yet but the start process was somewhat intimidating at first.

So I’m going to throw this back to you readers: What kind of apps or things can you do with your iPhone that you think is cool?