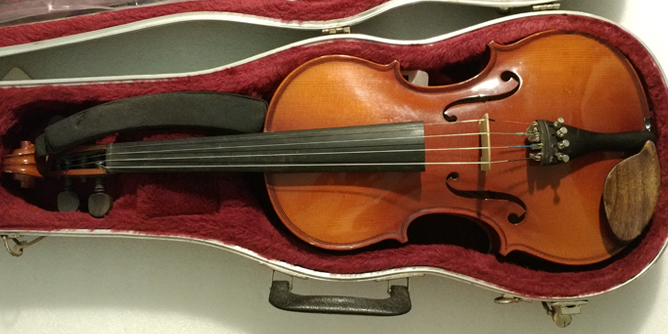 It has been well known that classical music helps one to concentrate and is useful for listening to when studying before a test or while doing busy mental work. The lack of lyrics can help you focus. There have also been studies that say people that are classically trained tend to be smarter (or is it just that smart people listen to more classic music) and that the longer you play on the instrument that the repeated oscillations and vibrations help break down or tune the wood to make it sound better. Maybe that’s why some of the world’s oldest instruments such as a Stradivarius may sometimes sound acoustically better due to the amount of playing that’s been done on the instrument.

We at SWM encourage all kinds of music appreciation and this week are highlighting the violin which is an extremely versatile instrument. It is sometimes called a fiddle in the country depending on the way you play it style-wise but for classical melodies it’s just simply known as a violin. The violin has been around for many years and one of the first songs I ever heard when I was younger included Tchaikovsky’s Nutcracker, Saint-Saëns’s Danse Macabre, Star Trek’s opening tune and even John William’s film score for Superman. Violins are so versatile they are even used in pop music and rock concerts. It’s no wonder that these instruments are timeless pieces that are often used in film and film scores. They can also sometimes be electrified to produce different sounds.

In order to make sounds you draw a bow horizontal and perpendicular to the strings to get them to resonate and vibrate. Bows are often made with horse hairs and can get dirty over time and sometimes may need to be restrung. The reason being that you use a block of amber colored rosin which has a sticky chalky consistency that you can use on the horse hair bow to make your bow grab the strings better.  I remember that one of the hardest but funnest things about learning violin playing was how to hold the bow properly and learning different strokes of the violin, slurring notes together and one of my favorite moves was different rhythms include punctuated staccato movements or the bouncing of the string in a spiccato motion. But you aren’t relegated to using the bow. You can even pick at the strings with your finger which is what’s called pizzicato.

I remember we had 3 books we learned off of in orchestra and we had chamber, orchestral and symphonic orchestra at our school for the best players, medium and so-so players and we had 3 different instructors. One was the resident PhD of music. One was the teacher of band as well and then another was just the violinist teacher I had grown up with for 8 years. One of the most nerve wracking things was audition tests in front of the group or in front of the teachers. I remember I would spend time practicing and using software programs to help me when I learned I could do so.

In violin class as many other music classes they also tried to teach various mnemonics to help you remember the staff notes including Every Good Boy Does Fine. There were others I’m sure. We got to wear tuxedos and the ladies got to wear black dresses and it was always my favorite part of high school even though it was always nerve wracking when performing or having to do practical exams. I do remember we had an opportunity to go to many field trips and one of my favorites was going out of the country with my classmates.

So whether you’re a Jascha Heifetz or a Jack Benny, grab your closest instrument and bow and start fiddling. Your next door neighbors will thank you! I guarantee it!