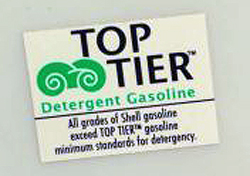 Hello again from SWM. Today we’re going to talk about top tier gasolines. What is that anyways? And did you know that gasolines are not all created equally. Our staff members didn’t know that either so we did some research.

Did you know that during the use of your vehicle when you are running you are burning up your gasoline and in some cases leaving residue and gunk inside your engine. We didn’t know that either. There are additives and detergents that are sometimes added to gasoline to this buildup over time and automotive problems and wear. Gasoline is taken from nature and has a lot of impurities and so when you are going through combustion there are many chemical reactions happening at once. The crude oil used has many things in the make up and there are refiners  and sometimes additional ethanol and other octane enhancing substances.

Because of the buildup that can occur in an engine within the valves and fuel injectors, problems such as reduction in fuel efficient, increased emissions, rough idling and stalling can cause a need for motor repairs. Sometimes it can create moments of too much or too little fuel and cause problems with spark plugs, pistons and misfires. When this happens the engine light can come on. Sometimes adding fuel-injector cleaner into the gas tank can help but if there are serious deposits then there may need to be a rebuild for the engine components. Due to certain contaminants a TOP TIER gasoline can be used to help reduce problems in the long haul.

Many automakers such as Honda, Ford, Chrysler, GM, BMW, Toyota, Volkswagen, Mercedes-Benz and Audi recommend this type of gasoline as they must maintain a level of detergent additives to improve and have a higher engine performance and cleanliness standard. Basically they have to have a set level standard on intake valves including prevention of sticking, fuel injectors, and prevention deposits on combustion chambers. The Top Tier are often higher standards of cleanliness than EPA standards also. These cannot contain metallic additives also.

The ones using Top Tier include (per Wikipedia as of the date of this article):

We found out about this little know secret of additives when we had a check engine light come on and a friend told us that AutoZone has a free check engine light reader that they will help diagnose the problem and also tell you what parts may be needed to fix your problem. It was a little electronic reader that can attached under the dashboard and takes about 20 seconds to read a code from your car.

The dealership said that due to our particular circumstance of issues from our reader, which if I recall had to deal with a catalytic converter(?) that sometimes gunk forms inside. When asked how gunk forms that’s when we learned about the things above. So it’s worth a little research to see if your vehicle would benefit from having a better gasoline. Check it out.