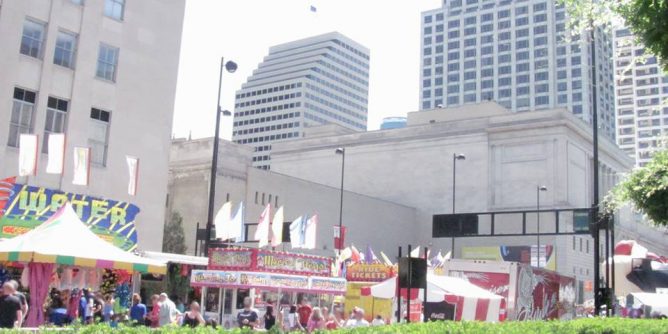 This summer, or even winter when you get ready to chow down or party down check out some of these great festivals below.

Bockfest – Oldest in the world where they release all of their bock beer on the same day. It is their lager that marks the end of winter and the beginning of Spring and is an underground festival. Usually in Early March at Arnold’s saloon

Cincinnati May Festival – Choral festival. Usually in May at Music Hall

Cincy-Cinco – Celebrate Mexican food and Cinco de Mayo and pinatas, fireworks and food and music. The Fifth of May at Riverbend

Festival of Lights – Cincinnati Zoo lights up the zoo with Christmas Lights. Usually November through December at the Cincinnati Zoo and Botanical Gardens

Fringe Festival – Up to eleven days of performance art, film, music, and other art showings. Usually Late Spring around town

Midpoint Music Festival – Largest music festival with several best through the city and has unsigned bands hoping to get signed on get picked up by big labels. Usually September around Town

Opening Day and Findlay Market Parade – Baseball is an unofficial holiday in Cincinnati because this city had the first professional baseball team. There’s a parade sponsored by Findlay Market followed by an afternoon game. The Reds had the honor of opening first but the Reds still get to open at home in recent years. This occurs the first Monday every April from Findlay market to the Great American Ball Park

Party in the Park – great bands and bear at Yeatmean’s Cove. Wednesdays in April

Taste of Cincinnati – Longest running food & arts festival and one of the largest street festivals. Over 40 restaurants and previewed and judged for the best taste. Music and live entertainment. Every Memorial weekend on Fifth Street