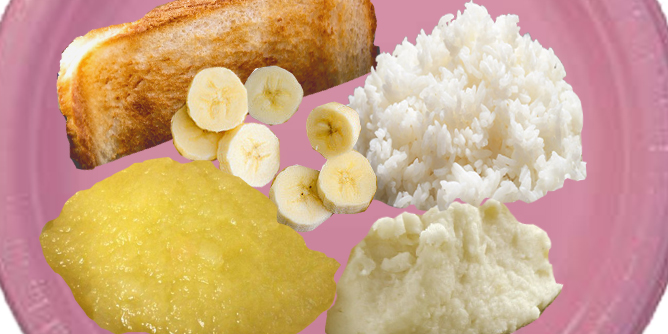 Are you feeling sick? Sometimes you might do what’s called a BRAT diet which is basically bananas, rice, apple sauce and toast. I don’t know if they are the best but they are supposed to be bland and not too harsh on the stomach for digestion. If you are feeling queasy, nauseous and vomiting or experiencing the runs of diarrhea then this is a possible choice. But they basically use bland foods. Sometimes you could use things like crackers or wet cookable cereals like oatmeal or porridge or cream of wheat. You might be able to use apple juice for young kids, a diluted weak tea or even some soda that doesn’t have many bubbles or is flat. Sometimes you can use soup broth and potatoes that have been boiled.

You want to try to avoid greasy fried fatty foods. Try to avoid dairy and milk or things with a lot of proteins. Certain raw veggies can give flatulence and also be hard on the stomach as well as fruits and fruit juices. Foods or drinks that have extreme temperatures are to be avoided including stimulating beverages like alcohol and caffeine containing drinks such as coffee.

Initially you may want to avoid food for many hours before you start eating these bland items. I remember after surgery my relative could not eat anything or drink anything. They were only allowed ice chips. Certain clear liquids were allowed as well as some relatively bland beverages and broths. However you want to introduce them slowly and slow down or cut back if you start feeling sick again. After a 72 hours or some soft foods like soft eggs, cooked fruits and veggies or plain common meats like chicken or turkey. However this diet is not necessarily the best for young children due to the lack of vitamins and minerals.  Just consider it an alternative back-up meal plan for when you’re feeling sick.