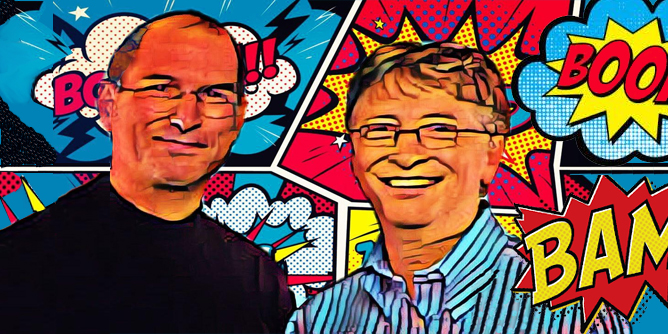 Every titan has a rivalry and a doppelganger. Heroes have their arch nemesis and foes. And every caped crusader meets its match. Just like Batman and Superman were often on the same sides of the coin they were at times at odds to each other.

And similarly Microsoft and Apple have many times been at odds with each other but there was one critical point in time that they teamed up and it altered history of computer as we know it. See the links below at the end of the article.

Bill Gates and Steve Jobs couldn’t have come from more different worlds. Bill came from an upper class well to do family while Steve Jobs came from a family where his young mother couldn’t afford to take care of him as a child and helplessly had to give to another family in hopes he would be adopted in a better life.

Bill Gates spent hours of hard work laboring and toiling often with pencil in teeth tapping out code while Steve Jobs would sit in on some classes in college and took calligraphy which he said influenced the beautiful types of his Macintosh.

Bill Gates was pretty much a straight edged kid although he had a speeding ticket once. Steve Jobs had experimented on a few substances when younger and also had studied from a yogi one time and learned Eastern philosophies. He was a bit mercurial but understanding. Bill was also impatient at times. Both were extremely smart and wanted things done a certain way and both had visions of how they wanted to influence the world.

They both were luckily born into the right time and right place to take advantage of a tech boom and computer age of modern computers.

Both didn’t see too much use for college.

Both were known for their philosophical stances on computing. Bill Gates wanted his computers for techy business people. Steve Jobs knew that computing was life changing and could be used for the good of everyone and developed ease of usability for the lay person with his iMacs and iPods and eventually iPhone and often had genuinely more loved products than Microsoft although Microsoft is strongly predominant in the business world.

Without these two setting aside their rivalry at a crucial point in time and merging and incorporating Office word processing software that was compatible across platforms computing would be harder to use. We are lucky to see these two put aside their rivalries and Steve Jobs use his connections and ability to communicate to lay persons, connect with celebrity and his impeccable salesmanship to garner excitement while Bill Gates used his tech expertise and business savvy to deliver a quality product.

Without these two in this modern computing error the face of technology might have never evolved exactly the same way and so society owes these two tech giants an amazing debt of gratitude. Hopefully the next few years will be faster and just as good if not better than the previous two decades.