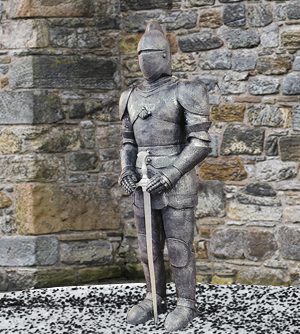 Connecticut Yankee in King Arthur’s Court
Every now and then I like to read a funny story that takes me into a fantasy
world. Mark Twain does a good job in this book that he wrote in 1889. Mark
Twain is an American born humorist that tends to write quite a bit of fantasy
and satire.

In his book there is a protagonist engineer from Connecticut who is
transported through time and space to England during the time of King Arthur.
He is captured and has to prove that he is not some evil person and being the
resource person that he is, he uses his knowledge from modern times to save
his life multiple times and also convince people that he is a magician. He
also tries to modernize society with this knowledge. In this book he pokes
humor in modern and ancient beliefs about the ruling class, politics, the
stock market, and also has a nostalgic, romantic view of the Middle Ages. The
book deals with underlying themes of religion, superstition, subservience,
education and tradition.

I remember having to read this in grade school and still remember that
although it was a fun and easy read, it was also quite detailed and took a
while. But one could easily get lost in the work of Merlin, Sir Lance-a-Lot
and Morgan Le Fay.

Even Disney’s King Arthur was fun and jovial enough about the story that it was quite entertaining.

Although I was not quite expecting a few plot points such as the
relationships of the protagonist and also the ultimate demise of him at the
end of his life, it’s hard to belabor a story when we wish we could have
experienced and lived vicarious through him. And he was also lucky for
instance to remember a historical eclipse which unless you’re a number’s guy is also highly unlikely to have happened and coincided with his visit. Lucky.

Give it a read for fun.

Have you read this book or any of Mark Twain’s other books? What do you think of it? Have you seen the movie based on the book?