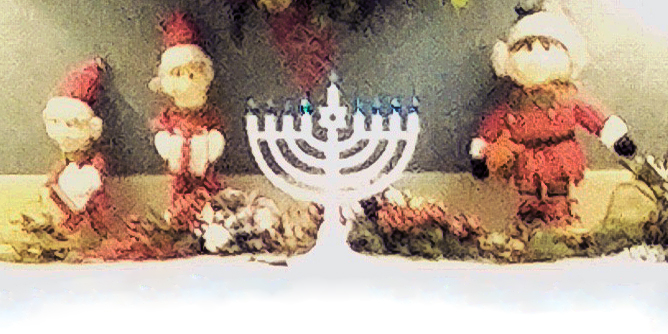 It is observed for eight nights by lighting candles of a candelabrum. This candelabrum has nine branches, called a menorah or hanukkiah. One branch is usually  above the others and used to light the other eight candles.

Every night one more candle is lit by the shamash which is the single unique candle mentioned above. until all eight candles are lit together on the last night of the festival.

Dreidel is a top based game which was initially used to hide the fact that children were learning religious based teachings in early times and when they were in the forest and people came upon them their suspicions were not raised because they just looked like kids playing tops.

Latkes are a traditional potato pancake type food often topped with apple sauce while sufganiyot is a bit similar to a jelly donut. Most of the foods around this time contain a bit of oil because the story goes that a temple was required to have lights be lit all night long but it was discovered that they only had a single night’s supply and somehow it had lasted eight days. So they considered it to be a miracle and thus oil is often the theme around this holiday.

Since it is the holiday season we encourage you to learn about different holiday traditions. You don’t have to be a particular faith or culture or group of people to appreciate different beliefs and customs. Not only does it make conversation easier but it makes you more well rounded and more interesting as a person. Cultural diversity helps you see things from a different perspective and open your mind to a different way of looking at things. And some of the most interesting people are the ones that think different. Kind of reminds me of a line in Everybody’s Free to Wear Sunscreen by Baz Luhrmann.

Anyways have fun, be safe, if you celebrate Happy Hannukah or Happy Holidays from our family to yours at SWM.