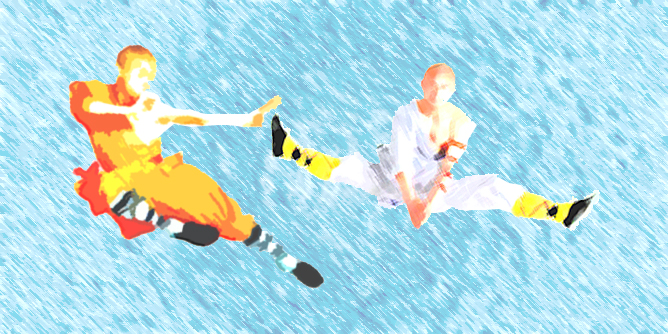 The Shaolin temple was founded in around the 5th century. And along with it came a very unique and special form of martial arts. Some of the teachings of the Shaolin martial arts was said to come from a qigong manual and also included some boxing as a form of exercise.

These legendary martial arts are actually practiced by the monks at the temple regularly and with lot of practice, strict routine and regiment and patience they show what amazing things a human being can do with their mind and bodies. They can withstand pain, make harder and more taut parts of their bodies, and also raise their body temperatures based on their minds, as well as, use forceful concentration to break glass at just the right spot to go through a single point in the obstruction according to Ripley’s site, believe it or not. They can also withstand sharp objects.

They also learn that sometimes there is too much noise and action making things look like you are progressing but sometimes you just need to be still and enjoy the now. It’s okay to rest and not having to be hustling and bustling thinking you have to be on the go-go-go. A lot of people have their day filled with work and so many activities and forget to just chill. They learn consistency and stillness is important.

They learn to seize the day and find what they enjoy about life. They don’t let society dictate what you should be happy about. And that’s also do something we don’t do well in modern times which is disconnect from electronics.

They learn effort is required in pursuing what they want. Nothing will get done if you don’t put in the effort. And they teach their people to “find that something” that makes you responsible which will give you a purpose and goal and direction. People that have discovered this either as a family member or leader get this natural innate sense of direction.

Also they learn “don’t be afraid to ask why in the world”. They are said to consider the question, “Why am I doing this every day?”

Some of the unique exercises that Shaolin do include one called “Ringing around a tree” which is an exercise that helps the monks build amazing strength by having the monks trying to uproot a tree with their bare arms. They gain incredible strength and hardness from doing this exercise every day till exhausted, resting and trying again. There is also one called “Iron Head” which strengthens the skin and head.

It was said that the arrival of an Indian Monk told them how to improve health. The height of the martial was between the 14th & 16th century. Only strongest were let in.

The Shaolin main location is in central China. They use meditation and training which begins early morning. They train for about 3 hours working on flexibility in strengthening. They also bath afterwards. They do so much training that there is not a lot of personal time. They only have less than an hour of personal time after eating. They also practice combat. Routines have stayed same from centuries before. They follow tiger, snake, dragon and crane animal style patterns for example in showing off wushu. A fully trained person has over 150 techniques.

Shaolin monks have a diet that is strict without large amount of protein meals. Since they train every single day they don’t have a lot of time to recover to increase muscle size. This allows them to  still be quite fast and flexible.

As times evolved even the best physical body techniques could not keep up with modern firearms and weaponry. Luckily they were a few monks that survived war.
The leaders started allowing people to see what they were about and also recruited them to teach.

Now they are still around and able to do great performances. In the recent years they have allowed people to see the training and practices to continue on their legendary skills. People pay just to be able see the temples and learn about them. Often they can take with them blessed souvenirs.

Have you ever been to see the Shaolin? Are you skilled in martial arts or living a simple focused lifestyle away from distractions of modern life? What could you give up on so that you could focus on your path in life?