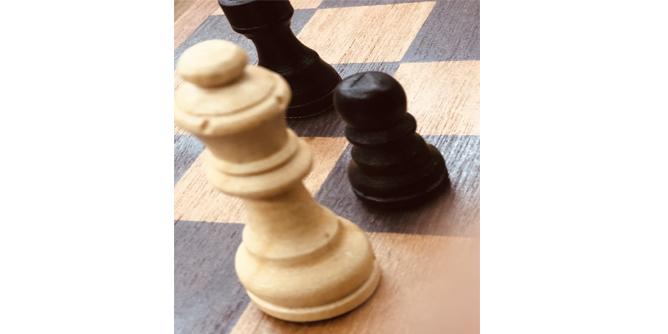 Chess is a historically old game that has been around for many centuries.

Chess pieces can be made of various materials from glass to wood to stone to plastic. Its variation is also what makes the game fascinating. This includes variations on the game including Star Trek versions. There is also 3D chess as well as games played using multiple boards.

Equipment usually involves a 8 by 8 board with red and black or white and black alternating squares, 64 in total. Sometimes there is also a chess clock that counts down time and which you tap after moving a piece.

Some of the big names of chess are Kasparov and Bobby Fischer.

There are a few main pieces on the board on each army. There’s a king, queen, rook, knight, bishop and a pawn.

The game has possible roots in Indian strategy games. All pieces are clearly visible at the start of the game. White pieces always goes first so it’s a toss up which person gets to play that color. Usually the last winner gets to play white but it’s at each person’s discretion who gets the first pic.

The pawns are the lowest in rank and often are overlooked or used as blocking pieces. But they can be promoted to any piece, usually Queen if they advance all the way to the opposing end of the board. The goal is to checkmate or block off the king piece so that he is in danger of attack from all sides or until no legal piece moves can be done. Pieces can be captured and removed from the board and the game involves mentally calculating the best move among various possibilities to advance toward a checkmate. Pieces can also be sacrificed for a better position or pieces can be “pinned” so that it has no choice but to be stationary to block an advancing attack. A person forfeit or resign or run out of time in games where a clock is used.

In the most recent years with the development of computers, chess has been an extremely fascinating game to make the game more skilled and harder to beat where the computers have been able to be better than some of the most skilled players out there. The most famous example was IBM and its Deep Blue against Garry Kasparov.

Some other AI engines included Sargon.

Each player takes turns moving a single piece except for certain special moves such as castling.

Rooks can move in any number of squares left to right or up and down which is also called rank and file.
Kings are the most important piece but are limited by the fact that they can only move one square. The king has one special move where it may switch position with a rook on a specific square.
Bishops can move any number of squares diagonally.
Queen can move in any direction left or right, horizontally or vertically or diagonally and are often the most powerful pieces on the board.
The Knights are the only one that move in an “L” shape and is the only one that can hop over other pieces.

Special moves for a pawn include en passant and promotion.

There are also times where games can end in a draw such as by a mutual agreement, a stalemate with no legal move and not in check, when they have repeated a position at least 3 times which are the most common.

Clocks can be used to make the play more intense. A player has to move before their clock runs out. Each player has a clock that is on a timer and they have to move their piece with one hand and using the same hand move over to hit a button to stop the clock.

Originally the chess versions may have used slabs or stones and had pieces representing elephants or chariots. This is thought to have originated in India and due to trade and imperialization may have migrate to Europe and Russia.

There are now books devoted to chess theory and things like end game and first-mover advantage and openings.

Chess notation was a way to play through mail or without the pieces and also record the moves in a fashion that can be studies. It uses a notation that almost looks algebraic. The pieces are abbreviated to a single letter and their position in a board. And pieces that make captures use an “x” to show what box they captured on.

Often the difference between a human and computer is that a human can only hold so many positions in ones head and can only analyze so many positions at a time as opposed to a computer which weights certain moves and determine if a position is better than another and also studies against historical moves at times.

Some common moves include pins and forks and sacrifices. Also a person often has to calculate the strength of their army by determining what pieces they have left. This can be done by assigning a system of value to certain piece combinations. For example Rooks are often worth more than pawns depending on position.

Pawn strategy is also essential to provide a wall or blockade against on coming assault. Once it is breached many other more valuable pieces are exposed to attack. For example doubled pawns can become a weakness in the formation.

Openings are also essential because they set up the attack and defense for later on. Some common ones include Sicilian Defence or Ruy Lopez. Many of these are tried and true defenses that have been done so many times and help control the center as well as provide safety and avoid isolated pawns.

Middle game is when the true strengths and weaknesses often unfold and attacks and tactical moves are done. This ballet of finding which pieces to keep and get rid of and allow to be subject to attack while opening up a counterattack formation can determine victory or defeat.

The endgame is usually the final stage where most of the pieces are cleared and it becomes a pawn and king game and decisions have to be made on where to move to determine if the game will end in checkmate, stalemate or draw which can make a big difference in tournaments.

Often chess was used to teach some war strategies during the middle age and it was a gentleman’s game. Many of these sets were elaborate and quite beautiful.

A few lessons in chess that can be applied to life looking ahead, seeing the whole picture, and pausing before action. It also teaches you to multitask and juggling multiple things at once. Anything that helps you do thinking is good for your brain.

It is such a popular game that you can sometimes see people dressed up as chess pieces and playing in a park as life-size pieces or people old or young playing the game in a local public location.