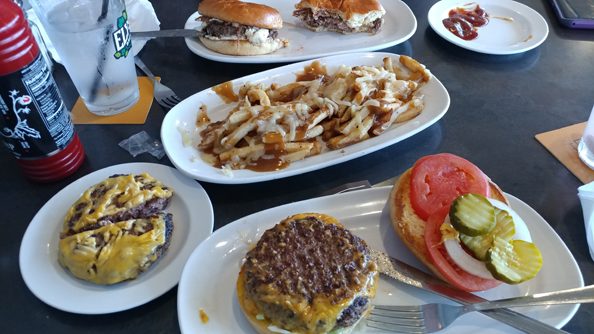 Today our group went to Flipdaddy’s which serves burgers and beer. I had ordered the Double Daddy burger with cheese and we also shared the Canadian inspired poutine entitled “Smother’d Fries – Eh?” which was basically french fries slathered in gravy and a sprinkle of Monterey Jack cheese. We also had some spicy ketchup they had by the brand name of 78 Red of which they also have a non-spicy version.

For drinks I had water with lemon and I dropped a Starlight mint in there just for the heck of it while my friend just had plain water. We both thought the food was quite salty and I didn’t really need the extra meat patty in my double cheeseburger. Although the food was actually quite good and they had generous portions.

I didn’t have any allergic breakouts today in terms of allergies. I personally thought the food was excellent. My hamburger came with tomato, onion, and cheese. I don’t remember seeing any lettuce but it probably did have a tiny amount of lettuce. I also decided to put some of the spicy sauce on my hamburger after testing it with the smother’d fries. It had just a little kick and was spicy without being overbearing. It seemed like the special ingredient was some kind of spirit vinegar inside.

It was a nice little sort of a gourmet burger place with a variety of different types of hamburgers inspired from different places around the world. We did notice that the menu was now an a la carte menu meaning you could order individual items instead of having them typically in combination with your meal. An example would be that normally when you order that you want a hamburger they would come with a vegetable or side such as fries but not here. That was a separate side because most of these sandwiches didn’t come with fries. It makes it seem maybe more pricey for a meal and probably makes more sense from a restaurant owner’s perspective economically maybe due to less waste. But who usually doesn’t have a side with their meal?

The total bill came to a little under $35 with tip and I left a $5 tip which was basically $4 plus a $1 tip in the cash. Earlier that day I had been hoping to go get some gyros for lunch but my friend was feeling more in the mood for hamburgers so I was not sure where was a good place to go. They had suggested some place like Red Robin or Steak and Shake and some other places. I did a Google search and one of the first few choices included Flipdaddy’s which advertised themselves as a gourmet burger place. I didn’t want to try Red Robin because I had tried them before and with Steak and Shake I’ve also tried them as well and so I wanted to try something totally new. When we got there to the restaurant it wasn’t a restaurant with a lot of pizzazz on the outside, just gray or green and it didn’t have a lot of decor outside. There was ample parking though and it was right there by Mason Montgomery, a little bit past the DSW.

To recap from earlier, we entered and we were greeted by the host at the restaurant and just asked for table for two and there was some Starlight mints of which I grabbed a few. We got seated at a table somewhere on the right hand side near the middle of the restaurant and weren’t sure exactly what to order at first because we just sat and wanted to look for drinks and my friend ordered water so I decided I wanted water too and I had asked for a little bit of lemon to put in with mine as well in later I put in the mint as well and it would sort of dissolved in the bottom of the glass became milky a bit. You looked around on the menu and there was so many different Burgers there but the most difficult thing to determine was which side to get with it or if there is something that could be paired with something else for economic purposes and also that wouldn’t be too off the mainstream and wouldn’t mess with our stomachs.

Some of the choices include an Alex Trebek burger which was basically a hamburger with poutine style fries on it and then there were also mushroom burgers. Additional choices on the menu included candied bacon in the “Shareables” section of the menu. There were also addional side items for purchase such as mac and cheese and some other things like chicken tenders I believe.

So at first my friend just wanted to try something off the beaten path like a generic burger or something I’m not quite sure but then switched to the French Connection Burger which is basically like a burger that had onions on it and caramelized or like crunchy onion rings of some kind I believe and then we both share the poutine which is sort of like a chili cheese fries but it’s like based on a Canadian dish but it’s a been Americanized so it’s got gravy with french fries and it has Monterrey Jack cheese on it. This order came first and then we kind of nibbled on it while snapping some photos in the meantime. A trick to this was remembering to turn my phone sideways when snapping the shot so that it looks good on the website.

The phone camera is now set on auto so that it would be faster when taking photos. It was a good thing that I set up the phone this morning so that it would be quicker and faster and able to take good photos. Then we took photos of the ketchup. We took photos of the poutine with the Flipdaddy’s label which came off of the napkin rings and then we also talked about work and life in general and different things. We were thinking of going to that Ferris wheel thing downtown but it was a cloudy day and so we didn’t actually go unfortunately.

The hamburgers came and it was a nice presentation. My friend had a good-looking Burger which came on a plate. Poutine fries also came with two separate plates so that we could put them on our own little side plate but mine came with lettuce and tomato and it had two layers of burgers which I really didn’t need because it was a really humongous burger, probably two quarter pound Burgers. I was almost too full. We were so full that we didn’t finish the poutine fries.

My friend really liked her Burger except for it being a little bit on the salty side. Everything was a little bit salty and so I think when we reviewed it we just hope that the chef didn’t have such a attraction for the salt shakers and all that. I do admit that the fries probably could have done without all the cheese would have probably been okay because it probably would have already had some kind of flavor in the gravy. The gravy didn’t really need to be there but it was okay and everything just basically was just really salty.

My drink with mint eventually got kind of odd because it is just something I made up with trying to give it some flavor. The spicy ketchup actually was pretty good at giving a kick and it wasn’t too spicy. We didn’t add any additional condiments. The waiter came and gave us an extra glass of water and then also ask a later on if we wanted any dessert which we didn’t. Then we paid , tipped, and left.

Later we decided to just go and get some drinks from local Kroger and also we kind of did some shopping around Kohl’s. I got me a little magnetic Scrabble puzzle piece set there and then we also look for pants my friend also got a little sweater cardigan at Kohl’s. We took some photos there and played with little shepherd’s hook also. And then we just basically went home.

Later I was playing around with the cell phone case and we try to put this cell phone with the protector in the glass protector on it so I have this other phone that’s useful for emergency purposes if I ever need. Then we try it out this Cherry drink. I think it’s a Knudsen brand of drink that we tried.

It was okay it was not really anything to write home about but it was something used for something that was sort of fizzy cherry flavored drink. Then we talked some more and showed off some USB cables and showed off some of show and tell colored items. I went home roughly about 8:30 and had a yogurt drink. We had bought some family stuff and just hung out and chilled. It was okay night. There was some kind of comment that we could have saw the sites downtown but it was a really cloudy day and we just decided postpone the Ferris wheel ride which is still going to be open till June.

Do you have a particular fun day plan for hanging out? What do you like to do on the weekends?