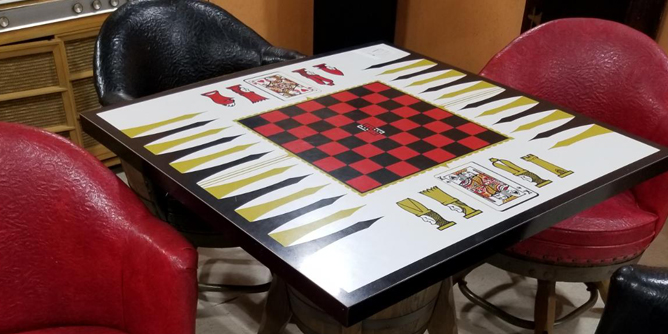 Checkers is the more popular kid brother to chess I would say. It uses the same red and black or checkered 8×8 board to play. Typically you have round stones or black stones, tablets that are one opposite ends of the board. Each player has either red checkers or black checkers and they move diagonally. When you encounter an opponent’s piece you can “jump” over that piece as long as there is an empty spot on the other end. If there are two enemies in the same diagonal then you can’t do a jump. When the checker goes all the way to the other side and reaches the end of the board then it can be “kinged” or “crowned” to be able to jump over a longer range diagonal that only has one checker in that direction and it also can move backwards at that point.

Players alternate turns. If there are multiple empty spots between an opponent’s piece than you can do multiple captures within the same turn using the same piece but only in a forward position until crowned.

Checkers are also called draughts in the English version of the game.

A computer version of the game has been able to be programmed such that it beats every person it has played against. And it has been shown that really good players will always end in a draw.