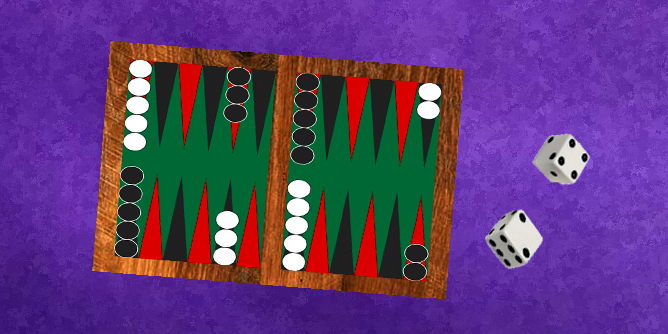 Backgammon has been traced back five thousand year to the Middle East and is one of the oldest known board games. It is a two player game where each player takes turns moving one of fifteen pieces which are often checker pieces. There are twenty-four triangles on the board that move based on the move of two dice. The main purpose of the game is to be able to move all of ones pieces off of the board. It involves strategy and chance or luck from attempting to roll a dice in your favor. A good player will have better overall wins. They will also have to pick various options of movement depending on what they roll and also use their pieces to prevent the opponent from having an advantage.

Backgammon is one such game that uses computers to great effect. Just like chess due to the amount of strategy and planning and randomization of dice and rules it takes certain definable rules that can be programmed to simulate the game. It has been done to such skill that it is capable of beating some of the world’s best players.

The board has two sides for each opponent. Each side is composed of 12 long triangles also known as points.

First the two players roll one die to determine who gets to go first. The player with the higher number goes first unless they they tie then they have to roll again.

When it is the player’s turn to play the player takes both die and rolls them. The individual die can be played by itself on one piece and the other die value on a different piece. Or they can be combined on a single piece as long as the move is legal. If the player rolls doubles which is two of the same number then the play plays each individual die twice. So 3-3 lets the play move four moves of three spaces. If one of the moves is not a legal move then that move is forfeited. There are other intricate rules as well.

Single checkers are vulnerable to be “hit” and have to be placed in the middle of a the board on the bar dividing the sides and then reenter the board through the opponent’s home board before any other pieces can be moved again. If the home board is completely blocked off the the player might not be able to enter again until there is at least one legal move.

Only when all of the checkers are back in the player’s home board section can that person start removing them off the board which is called “bearing off”.

A doubling cube can help make the game play faster.

There are also variants of backgammon such as Acey-deucey and Hypergammon as well as many other variants.

Backgammon also has strategy and theory and openings although not as extensive as chess.

TD-gammon was one of the first programs to play backgammon at a high level of expertise.

The game became popular in the U.S. around the 1960s and there are now backgammon clubs around the country.