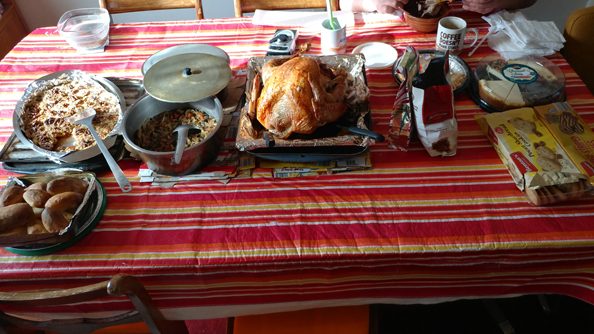 Christmas dinner is a tradition that usually occurs around Christmas time. This can be any time either the night before also known as Christmas Eve to the evening of Christmas day. Usually it is has a lot of food and calories. And it gives a reason to get together and celebrate the time. The food varies but often involves meat and sweets. For example often there is turkey and a plate of cookies or hot sweet drink like hot chocolate.

Many of these foods are learned from other cultures and adapted into their own.

Often there is some big dish from a bird such as turkey, good or duck and yams or potatoes or carrots which are basically root vegetables. There may be other kinds of meets such as the best of beef cuts or a type of ham. There are often gingerbread and sugar cookies. And then several pies. Although a lot of people talk about the holiday fruitcake it doesn’t get much respect in the culture.

Often there is wine and drinking and cocktails as well as juices and other types of spirits. Eggnog is involved. Other cultures may have some types of shellfish or bread and seafood.

Also often the only places open on Christmas was Chinese food restaurants so that is a tradition for some families.

Some countries do cold cut meets with sauce and vegetables or barbecue and fruit mixes. Some places like New Zealand might do roast lamb.

Often chestnuts and other nuts are also eaten around this time.

Foods also depends on what people have and what’s available.
Some places have foods and traditions that differ based on their region such as tamales and flan. There may also be pork served or cranberries and puddings. Some people also eat marzipan. Some eat Sarmale cu mamaliga si carnati which is stuffed cabbage and pair it with pork sausage. Others include boiled eggs.

For sweets there might be cakes, candied fruits, chocolate, nuts and raisins and cranberries or cherries.

The holiday is a great time to be with family and talk, play games, reconnect, and food is just one of the ways people connect. Whether old or young everyone has a favorite food memory from the holidays. So we at SWM want to wish you Feliz Navidad, Merry Christmas, Happy Holidays and a grand New Year. Thanks for reading and here’s to another great year of learning and inspiration.