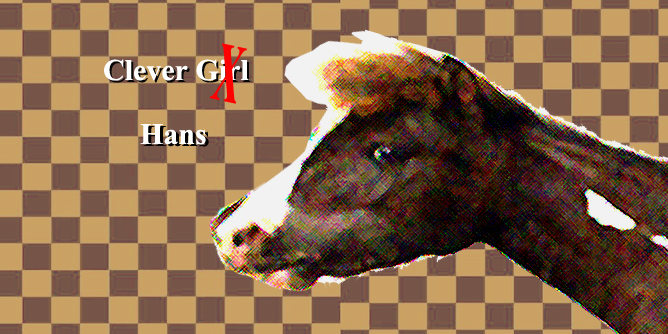 In the early 1900’s there was a fascination in animal intelligence and people wanted to believe that animals are more intelligent or smart enough to be equal to a human being. There is still a study about a lot of this but one particular story which is based on a real life example came to mind recently. It dealt with perception and the power of intention. Here is the story of Hans.

Hans was a horse that was owned by a person by the name of von Osten. That is Wilhelm von Osten. He was a math teacher and horse trainer and interested in the mind. It was said that he had taught his horse all manners of tricks and exercises to do with math. His horse could supposedly add and subtract. It could multiply and divide and count and tell time. And it responded to questions that his trainer would ask verbally by tapping its hoof in response.

As an example: von Osten would ask, “Hans, what is one plus two?” And Hans would tap its hoof, “one, two, three”. And everyone would be amazed. Supposedly questions could also be asked verbally and written. Huge crowds would gather to watch and witness this supposed amazing performance and feat of animal intelligence.

One day the German board of education wanted to investigate these claims and hired Carl Stumpf, a psychologist and a group of thirteen people know as the Hans Commission including veterinarians, circus managers, a military officer, workers from the zoo and school teachers to see if there were any tricks because they wanted to know scientifically if this was actually possible.

They tried having someone other than its master ask the questions, a random spectator inquiring, hiding the horse’s sight, and asking random unknown questions. And what they found was that the questions could be asked by someone else. They also found out that when the questioner knew the response the horse usually got the question correct but when they did not then Hans didn’t always get the answer correct.

Ok, So What Really Happened?
The answer to this mystery lies in the fact that Hans was really good at reading visual cues and Pfungst, the owner was a good showman after doing so many shows and performances. He often was able to project the answer’s intent regardless intentionally showing or not showing them. This is called a “Clever Hans Effect”. In order to test animals there has to be a way to prevent the transmission of what an intended outcome will be from the person to the animal. Obviously an animal handler has a relationship with their animal they are training or care-taking. And over time there may be certain learned patterns of behavior. Even so you can’t always take a person away from the equation. Because examples of this can cause an animal to anticipate a response or wanting something to happen when that’s not what the trainer intended. And it can create false results. A example of this was noted in dogs and humans where the dog is to find some item for the human and thinks that’s what they want. Think drug sniffing or bomb sniffing where false positives occasionally may happen.

Even later Clever Hans still performed and was marveled by many after the debunking of his mathematics and intelligence abilities.

This story was inspired from a book that the editor read when they were younger. If you liked our mystery series and have other neat stories or fascinating “how-did-it-happen” stories comment below and we may write an article about it. Just like Encyclopedia Brown our site encourages ways to think outside the box and learn and make yourself a smarter individual. No time period is off limits, a good story is a good story.