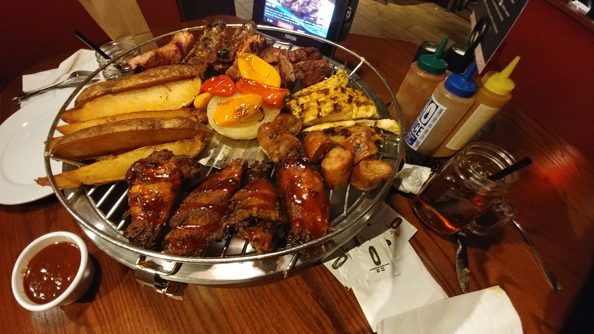 This is a casual dining restaurant which serves grilled specialty American fare with bar drinks. You can go out to eat and enjoy conversation with family and friends and watch TV late at night. They don’t necessarily advertise as a sports bar but they do have plenty of TV’s where you can watch entertainment. On the tables you might also see mini monitors where you can play games for a small fee, order additional items, call the waiter and also pay for your dinner.

The menu was a bit on the pricey side and I couldn’t decide exactly what I wanted that night. We ordered the Bone Fire dish which consists of Smoked Baby Back Ribs, Smoked Chicken Wings, Smoked Sausage, Chicken Breast, Grilled Onions and Peppers, and Homemade Fries. And this was served with Housemade Bones Sauce. The restaurant we went to had this as an insert in their menu and you could get its serving portions at 2 for $32 or 3 for another price or 4 to 5 people for another higher price.

My review partner had a major hankering for fried green tomatoes which was a yellow to light green. It was soft and warm and not squishy and had a crispy sort of cornbread outside I would think with just enough give. It came with a sweet tomato-ey marina sauce and my friend commented on how redundant the tomatoes had more tomato sauce to go with it. It was okay and slightly sweet and I only had a taste of it and thought it was just okay.

For drinks I had the sweet tea which was one of the best sweet teas I’ve had in a long time. My friend also had a coke. Our drinks came in mason jars, which I liked because glass lends a bit of class.

They had different sauces. There was a mustard, a barbecue, and a vinegary spicy sauce.

The meats were pretty good. The Baby Back ribs were good but a bit dry and the smoked wings also weren’t infused with a lot of moisture but not dry and still tender. Many restaurants like to burn their food but fortunate this was not burnt and tasted good. The smoked sausage was quite delicious with just a hint of spice and reminded me of the time I had gone to the Newport Italian fest but it was in smaller pieces and not a big roll. It did not try the big roll of onions or the roasted sweet peppers, but my review partner did because they were curious if it made the peppers taste any better. It was just peppers I said and they agreed. The Fries were thick cut. The smoked chicken wings gave me a bit of an “oh!” because it was a bit warm to almost hot temperature-wise and the sauce was slightly spicy but I quickly got used to it. The whole dish was served on a big black steel type bowl with a flame on the bottom heating the grill up top. Although the flame wasn’t very big. But it did actually keep the food somewhat warm while we went around picking at the food with our tongs.

They seemed to be closing up shop near the end of the meal and stacking up chairs or flipping them upside down. The restaurant had a nice bar and we got a big octagonal booth. There were some electronic fireplaces also and the bathrooms were spacious and clean.

The total bill came to $50 with additional $10 tip and we paid using the device that was on the table. I was actually pleasantly full and we had enough for almost two meals. Meats usually are much more easy to eat than foods with a lot of carbs. We decided to go walk around Meijer just a few blocks away and get winter items like a sweater and then when we got back to the car it was still smelling good in our to-go box.

Over all the food looks great and smells great and there certainly had a lot of people. Although, I think the food could have been a bit more moist. But we do think it’s a nice place to visit for a meal, just be ready to spend around $50 for two if you go here and get appetizers and such.