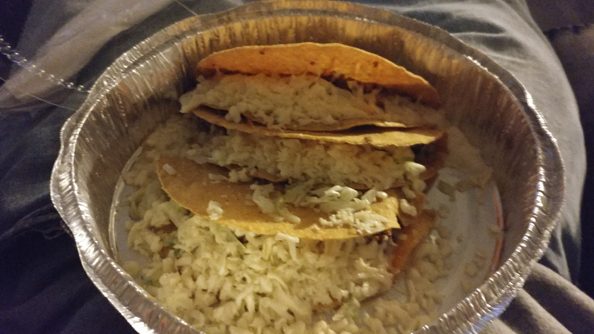 Tonight for dinner we ordered using DoorDash from El Caporal.

The nice thing about DoorDash is it allows you to schedule roughly when you want your meal to be delivered. We scheduled the time to be delivered in about another hour or so and they actually came a little early.

El Caporal prides itself as an authentic Mexican restaurant. They have several locations across the country.

You can check them out at: http://elcaporaldiner.com/

First off, apologies for the fuzzy pictures but we took these in low lighting and very quickly.

I was feeling still full from the food at lunch and it was close to dinner time and so it was decided to get some food and have it sent over in an hour so that we could continue working.

We had forgotten to get drinks but waited and watched some TV after all the work was done and saw the car coming up. They were courteous and we got the order in a nice bag with a lot of items.

I had simply been in the mood for something small like tacos or with beef or lettuce like a salad. And I must say I was blown away. I have never been very much into Mexican food but the food was absolutely fantastic. My normal fare and knowledge of Mexican food runs the gamut of burritos, Taco Bell and quesadillas and enchildas. I was expecting another soft lime-y bland soft flour taco or a dry crusty salty taco but the taco exceeded my expectations.

These were the best tacos I’ve ever had in my opinion. Maybe it was the way it had been by the time it was delivered but the white cheese was amazing. I had ordered three tacos and my friend ordered three tacos and I couldn’t decide what to choose: ground or shredded beef and let them randomly pick but I was pleasantly surprised at the ground beef. It was well seasoned and tasted great and was not over the top salty. It was not cold and the cheese had just a little salty flavor also that I liked and was melted and very finely shredded but not too much cheese, just enough to be filling along with the taco beef meat filling. It had the right amount of salty and spiciness.

The other reviewer had a Chimi Changa which is a meal with two flour tortillas rolled into pockets, fried or soft, filled with your favorite ingredient covered with creamy queso blanco dip and salsa roja, served with rice or beans, lettuce, tomato and sour cream.

My friend had the chicken and had a nice flour tortilla and cheese dip and rice and veggies and condiments.

This Chicken chimichanga costs about $9.99

It was suggested that we get some Sopapillas for $3.25.

Now I wasn’t sure what those were but was entirely game to try something new. I looked it up on the site later and it describes it as
flour tortilla chips lightly dusted with cinnamon and sugar and coated with honey. Possibly topped with whipped cream.
I didn’t see any whip cream on the order but saw sort of sweet drizzle of what I thought was chocolate or honey. I learned later it was honey.

The sopapillas were absolutely amazing and “amazeballz”. It tasted like it had chocolate but was honey and had cinnamon and sugar and was crispy. It was sweet and crispy and warm still and I think life changing. I think it was really good and one of the best meals from a Mexican restaurant I’ve ever had. I would think of it as a better version of a cinnamon toast crunch with less sugar and much more subtle and a hint of oil or oven baked.

We simply added some pink lemonade Crystal Light to our meal on our own. It was delicious and a fast mean and there were even leftovers for later. We were plenty happy with the meal choice for that night.