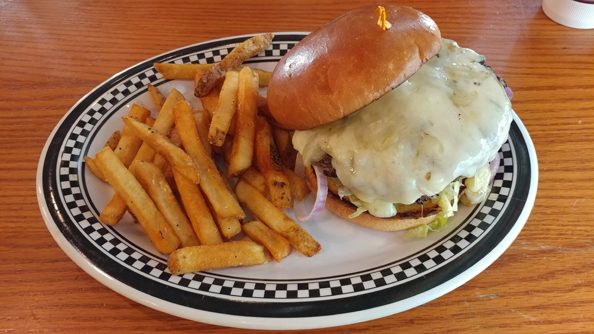 Today I went to Quaker Steak and Lube with my review partner to try out their food and see how tasty it is. I had never been there but the other reviewer had. We went to the one in Florence which is located in Kentucky near the Cincinnati, Ohio. They are a fun motorbike / motor-themed, auto and car themed restaurant. This one opened around October of 2012. They have an arcade, a claw game, a bar, tons of motorcycles and automotive decorations all throughout the restaurant and family friendly bar. According to their site they tout at least 25 different wing sauces and you can even purchase a bottle of their delicious wing sauce to go.

We were in the neighborhood to look at some furniture at a local shop and it was only open certain days of the week and after a few hours of window shopping wondered where to go so we decided to stop by a local restaurant for some grub and eats.

Next door is a Harley Davidson shop with a huge mechanical wheel horse hybrid. The first entrance door handle to the restaurant looked like a gasoline handle that you would hold if you were trying to refill your car or vehicle. There was a small walkway but it wasn’t dim seeing as how it was the middle of the day and a bit of wood decorations. The hostess greated us and asked how many were in our party and then asked if we had a seating preference. We didn’t have a preference today and they took us to where we almost thought we were going to get a big booth again two days in a row but instead got a four seater booth by the window. The whole restaurant was super spacious and had stools, booths, tables and all kinds of fun car type decorations. The outside of the place almost looks like a car shop and oil change place but inside was almost like a Planet Hollywood of cars or something where it was all car themed.

My friend had been to the restaurant before and pointed out the lunch menu and I briefly glanced at the rest of the menu before deciding that was a good choice. I decided to be a bit spontaneous and get their root beer even though I don’t normally like to order fizzy carbonated drinks because of how it makes me feel so full with my meal.

I ordered their “pick your cheese” burger I believe and got it with provolone cheese although there was also a choice of Swiss, pepper-jack, cheddar-jack, cheddar, or American cheese. This was served on top of shredded lettuce, tomato, red onions and dill pickle chips. I also opted for their french fries which were lightly seasoned with salt and pepper. They were straight cut fresh fries. I could have chosen chips instead.

My friend had the garlic wings. It had a golden orangish garlic wing sauce and got about 3 to 5 sticks of celery with likely blue cheese dressing and also a side of straight cut fries.

For drinks, I ordered a bottle of their QSL Old Tyme Bottled Root Beer. My friend had a lemonade which was a strawberry lemonade. It was called the Unleaded Lube-N-Ade and got it with strawberry flavor and once free refill. And on the second refill opted to just get it as plain lemonade.

I thought the hamburgers were really good.

The burger was really greasy and the right temperature for a hamburger to be and cooked all the way through. It had a lot of cheese on it. I was glad that it had normal salty dill pickles and not the sweet kind that some fast-food restaurants use. The hamburger was really delicious and they had good presentation. Sometimes you have a hamburger that has a lot of extra sauces and things to cover it up but this was full of flavor and the onions were delicious without being overly pungent.

My friend who was also doing the review that day noted that they have an Eat Heat Challenge where you can eat their Triple Atomic Wings with are rated at 500,000 Scoville Heat Units (SHU). According to Diamon Culinary Academy, this is hotter than a Ghost Pepper which has an upper ranger of 350,000 Scoville Heat Units. A Naga Jolokia has almost a million Scoville Heat Units. And Police Grade Pepper Spray is 2 million SHU while Pure Capsaicin has almost 9 million SHU. A regular Bell pepper is between 100 to 500 SHU and a Jalapeno is up to 500 SHU. A Habanero is about 100 thousand to 325 thousand SHU. And Tabasco is about 50 thousand SHU. You would have to be really brave to do that kind of hotness for wings and it does mention that you have to sign a release form to try the wings, but you do get a Challenge T-shirt. I wasn’t really interested in trying the challenge out today, or any day of the week considering I have a heat allergy to jalapenos and certain peppers. But it was nice to know that I could voluntarily make my food eating experience an unpleasant one if I wanted and pay for it. Pay dearly indeed… Kidding of course, kinda sorta.

Halfway through our meal the head of the restaurant even came around and greated us and asked us how our day was and if we were headed back to work today and we were just enjoying our weekend. And we were thanked for choosing to spend time at the restaurant which was nice.

The price was okay and came to under $25 for two with tip.

We checked out the arcade and giant claw machine before we left. They had some driving games and toys you could win and nice stools and a little purchase area. I think this would be some place fun to go to again for lunch. I’ve heard good things about this restaurant from multiple people and they seem friendly and the food is pretty good. I think I stuffed myself too much with the root beer so will probably order a regular juice next time I’m here.

I would most likely be up for coming back to this restaurant.