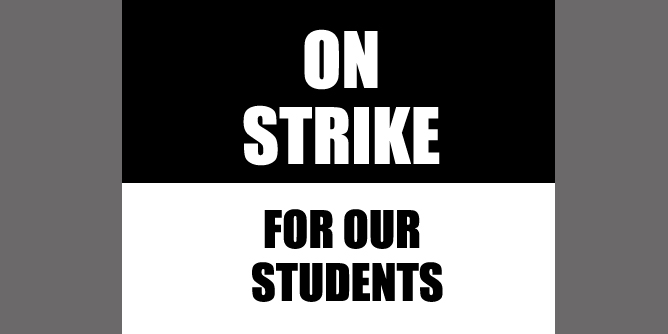 Note: This article was updated at the end on January 23, 2019. Scroll down to see recent news. Additional information may be updated as it comes.

What is happening in the world right now? Yellow Vest Protests in France, government shutdown in DC, TSA security officers calling sick at
airports. Seems like there is a lot of worldwide financial turmoil going on right now.

And now there is a major teacher strike in L.A. According to many news sources such as CNN there are over half a million students with some estimates close to above 600,000 or more students at nine hundred schools affected with around 32,000 teachers on strike and the first teacher strike in that city in 30 years. This is the second largest kindergarten through twelfth grade school system in the United States’ school system says another news source. They are bargaining over trying to get more teachers hired and a better teacher to student ratio. They want more one-on-one teacher interaction with students instead of 40 to 50 students to a single teacher in a class. And of course, they want higher salaries as a result, but also more funding not just for teachers but for nurses and counselors and librarians. They are also trying to fight privatization of education and the trending direction toward charter schools.

The classes still have to continue and students still have to go in so many schools have hired substitute teachers and temporarily shuffled some people around to still go on.

Currently there’s also a dispute about certain facts and figures and numbers between the school and the union. They are trying to logistically figure out whether additional tax levies would be in order.

Parents and students are now caught in the middle and this strike may propel or spur other strikes across the country to follow suit.
There have been strikes and walkouts also in Kentucky, West Virginia and Oklahoma. Many in Arizona were also on the picket line trying to get a more fare wage a while back. There were also walkouts in Colorado and Chicago. North Carolina and Washington state also had some demonstrations last year.

Apparently like the 1976 film “Network” these teachers are like Howard Beale ‘s character and “mad as hell” and “not gonna take this anymore” regarding the unfair wages and imperfect situation.

The teachers also want better learning conditions for the students because the schools are understaffed and have a hard time trying to give students the one on one attention that they need. These schools offer a shining beacon of hope from rough neighborhoods or rough homes sometimes and offer a meal and certain school programs and extracurriculars. The strike will add some stress while they figure out transportation and who can take care of them in some circumstances.

I know that most people go into teaching not for the money but they want to model and shape and serve as an example for the children in our community. The strike may help the teachers be able to better afford things such as homes and take care of expenses so they don’t have to worry about finding some other line of work.

Some reports also stated that there are certain extended hours at the local recreation centers throughout the city including free lunches for the first day when the strike began. It mentioned also that school meals will likely continue and only special-needs education centers and preschools may likely be closed.

Why is there so much unrest going on globally? It seems that finance is big on everyone’s mind lately and so it is a very smart idea to save funds for a rainy day because apparently worry about budget and finance is not isolated to your local neighborhood.

Reports say that some charter schools in California are striking, a first for the state. It said that they can organize as well as seek union representation but it’s not as common. They are usually exempt from union contracts.

According to the New York Times, the LA strike is set to end soon as over 30,000 members in the union have ratified a contract on Tuesday and classes are set to resume on Wednesday. It began Monday, January 14, 2019 and is ending soon with a visible 6% increase in salaries, additional staff and lower class size while being a win all the way around. According to CNN, it cost at least $125 million and had actors, celebrities, musicians and firefighters taking up the fight with the teacher’s union. However more trouble is set to come according to ABCNews as Denver, Colorado is set to have a teacher strike at the end of the month around the 28th. Seems like fair pay and fairer conditions are the name of the game this year. More news to come possibly in the days ahead.