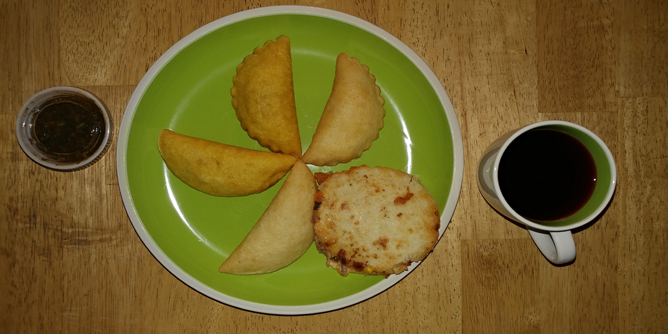 Today I went to Zona VIP in Springdale, Ohio to try their food. They specialize in authentic Columbian food which is one of the only places to get it in the area. It looked like a small little restaurant but it wasn’t that bad at all. I pulled up to the parking lot which was plenty of space. We were worried it was a little hole in the wall place and it didn’t look like a lot or was smaller on the outside. I went in by myself being the adventurous type that I was and found it was pleasant inside. There were three doors and two of the doors were locked even though it said push. So I went in the one nearest the kitchen.

Inside there were at least 3 to 5 people waiting in line to pay or pick up. They didn’t close until 8:30pm but I had gotten there at about 5:30pm. There was a bubble gum machine, some ethnic coffee candy packages for purchase, some nuts and fruit type rolled candy and a guava bar type candy. There was a window behind the guy at the register to the kitchen where you could pay with a tablet/ square device and there were at least 3 televisions in the place, a few booths and benches and tables with hot sauce and some nice decorations along the wall. This place is a Columbian restaurant and I just wanted to try something new.

They had a little miniature doll house that was hanging on the wall, and a sombrero looking like hat thing and a scarf and instrument.

I ordered the four kinds of empanadas that they had and also one of the arepas. Empanadas are very popular and are a fried flour snack that usually has a pocket that is stuffed with items in. They describe it as Colombian pie with filling.

Of the four type of empanadas they have they had these types.
Carne (Beef)
Pollo (Chicken)
Queso (Cheese)
Tipica which is rice, ground meat, with boiled egg
These were each prices at $2 for each empanada.

I also got the Rellena con carne a la criolla which is basically two circular fried “grilled corn meal flour patty bread” with the following ingredients in the middle:
Beef, corn, cheese, avocado
I didn’t think I noticed avocado after I ate it but it must have had avocado because it was green and might have had some red tomato type sauce.

The beef was really good and was like chopped steak inside fried flour. The chicken was the typical shredded chicken with some seasonings.

The cheese empanada was pretty good and tasted like a fried mozzarella stick. It was a lot of cheese and still stretchy and warm. The floury outside was a nice not overly greasy and not overly floury. It was actually pretty good and not too filling.

I enjoyed all of the shredded beefed with minor spices, the chicken was moist and tender and delicious. And then the tipica was actually quite good because it had some ground meat, not overly soft and flaky and not overly hard. The boiled egg was cooked just enough and not runny and there was just enough in it that it wasn’t too overbearing.

My friend tried the Tipica and said it was okay and not bad.

I would classify this restaurant as more of average household way of cooking that’s not fast food and a bit better than fast food in terms of quality.

The restaurant was clean. They had napkins throughout.

The food came in a bag and the empanadas were just put directly in the brown paper bag and a bit of grease was visible on the outside of the paper bag by the time I got home. But the plastic bag helped keep everything clean in my vehicle and kitchen table. The arepas were in a foil wrap.

We also had a sauce that was sort of reminded me of a soy with cilantro and was a little acidic. My friend described it as a green enchilada sauce. It was spicy and a bit tangy. Possibly onion, jalapeno, and veggie stock. Might have been aji picante sauce which could have habanero, cilantro, green onions, small amount of tomato, although I didn’t really see any tomatoes, lime juice and vinegar since it was tangy.

The sauce was okay but didn’t really stick but did give everything a slight flavor without a lot of salt being added.

I think I would get stuff from them again sometime again possibly because they just tasted like home food.

I had some Crystal Light cherry pomegranate drink later to wash it down as I had taken my order to go.