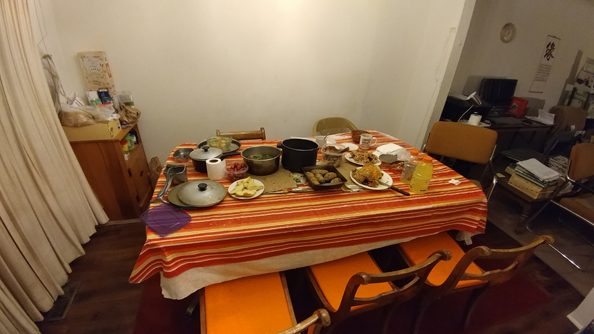 8:41 PM Monday, February 4, 2019
Today is Chinese New Year Eve. This is a festival that is celebrated in China and many Asian countries. It marks the beginning of a new year on a traditional Chinese calendar and is sometimes referred to as a Spring Festival or Lunar New Year. Often it is held before what is a Lantern Festival. This festival is held on the first new moon which is usually between January 21 and February 20th.

Since it is 2019 the lunar new year falls on February 5th. Each year is marked by a type of animal which has its place in a zodiac calendar that describes traits of a person’s birth and characteristics of personality. It is similar to how in Western culture they may use horoscopes based on months and begs the question of whether a person is subject to predestination and fate.

Chinese New Year is often celebrate also in countries such as Indonesian and Malaysia as well as Vietnamese and South Korea.

Traditions are often to honor deities and ancestors and can vary widely. Some have a traditional dragon’s and lion dance with colors of red and green and yellow gold that represents prosperity and money. Red is traditionally associated with good luck. Often the night before families will have a great dinner with family and it is customary to clean the house before and not on New Year’s Day so as not to sweep away the good luck. Often there are adornments and decorations such as scrolls and lanterns to attract wealth and happiness and good luck. There is also often a lot of noise and fireworks and the giving of red envelopes full of money to each other and the kids and delicious traditional foods.

This year marks the year of the Pig but each year has a specific animal that rotates in cycle each year. It includes:

People are typically encouraged to get newer clothes and shoes to start a new year year and look nice. And parents may encourage their young to get something nicer so they can look nicer, attract wealth and look the part of a sharp person. Scrolls may have phrases and poems with phrasing as decoration. Grooming and haircuts are typically done before the new year. And gifts are given. Also many altars and statues are cleaned beforehand.

The reunion dinner as it is sometimes called has many delicious meats, desserts and other items of consumption that can be compared to Thanksgiving. Often there is prayer soon after.

The next day there is often incense to ward off bad spirits and often there is no meat consumption on this day. Everything is consumed from the night before and lasts a few days.

The red envelopes which seem to usually be given to younger members are known as blessings and good luck and to wish for a good long life.

There are also days where people get to visit relatives that live far away.

Near the fifth day there is some foods that are sometimes eaten like dumplings for instance and usually a lot of places are back open shortly following this day.

Some people eat foods like tapioca balls in certain meals in Asian cultures and also save their foods and specific parts of their meats to last for several meals so they don’t have to create new meals and can instead concentrate on enjoying the holiday and traditionally it is with the belief that they will have abundance from one year carry into the next. Some traditional foods may include noodles for longevity and fruits and cakes and various vegetables.

For some the Chinese New Year has a celebration that lasts fifteen days and on the 15th day there are rice dumplings or a sweet sticky rice ball cooked in soup and lighted lanterns also to celebrate this day.

The main dinner on New Year’s Eve is large and plentiful and often long and eaten to enjoy time with family and food. Pork is often in most Asian meals but there are traditionally various meats that include chicken, fish, sometimes duck. There may be a hot pot and special meats such as the duck and seafood. Food that is cooked in meals are often expected to last several days and so all items are not completely consumed to preserve and have surplus into the next year for good luck. And some dishes and items are only for this special occasion.

Often the red money packets are distributed soon after a meal. Normally these are to unmarried individuals from elder or married couples to single individuals. Usually the contain money and are often even numbers or lucky numbers. Usually the bills are completely new and shine in following with being new to follow the tradition. And it is typically customary to wish each other a good year when accepting the gifts. The tradition is also to keep the money for a week without spending the money for good luck.

Giving gifts is also a common occurrence and usually associated with special superstitions. There is also a lot of decoration and symbolism around this time. Lanterns are bright. Noise is used to scare off and ward off bad spirits.

A lot of people get workplace bonuses and a lot of money is spent at the market or gifts bought around this time. It is a big commerce time. People travel home carrying gifts. It is one of the most important times and holidays of the year. Even in countries like Europe and North America which have immigrants or a large Asian population have started having parades and week long celebrations, feast, parades, fireworks and festivities as well as performances.

Some foods that we were able to eat for this year included rice, snow peas and carrots with a bit of cucumber, a type of mustard green, chicken, duck, sardines in tomato sauce, sliced roasted pork, baked potatoes, daikon radishes, red radishes, Bartlett and D’anjou pears. Have to say, it was plenty delicious and it is truly something everyone can celebrate.

If you see someone on February 5, 2019 or even the next lunar year don’t forget to wish them Happy New Year!!

From our site to yours, Happy New Year! May you have wealth, happiness, longevity, prosperity and good luck!