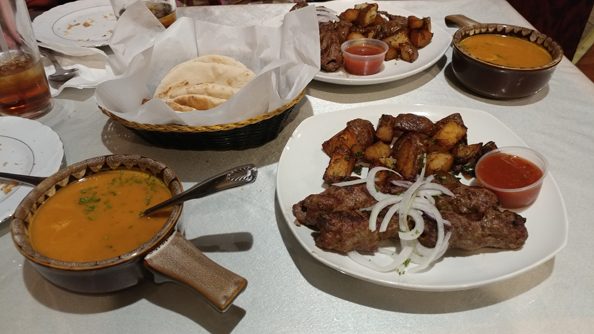 Today I decided to go out and try out the Mirage Mediterranean restaurant and to review this restaurant. I have been wanting to go to a restaurant that specializes in Mediterranean and ethnic foods and this restaurant definitely delivered not only in their menu, foods, but also their taste and appeal of foods from different European regions.

They had an extensive menu that includes various drinks and juices and desserts but also various appetizers.

I had originally wanted to order what they listed as a “creamberry” drink but it was a typo said the server and they said it was actually supposed to say cranberry. I decided against that and instead decided to get the raspberry tea instead.

We ordered from the menu and got a lamb lula kabob and beef lula kabob. It came with a choice or rice pilaf and fries or Russian potatoes with lentil soup or a salad. I decided on the potatoes and lentil soup while my other reviewer got the lamb kabob and also the potatoes and lentil. The soup was a pleasant lentil soup which I felt was seasoned perfectly and had a great taste and was quite filling. The other reviewer was more accustomed to a higher sodium and higher salt content in most American soups and wasn’t used to the “blandness” of the soup.

The restaurant was nice and had a glass top and shiny table cloth underneath. There was an A1 container and salt and spices on the table.

The lamb was a delicious roasted smokey meaty flavor that was tender and juicy. The same was the case for the beef. The potatoes were incredible and had plenty of flavor and garlic and parsley.

Here you can see they have various condiments that include Tabasco sauce and ketchup and A1.

They brought a pita basket that had about 6 pieces of pita that was a good pairing with the meal.

In this picture you see a nice setting with white curtains, pictures in frames, nice formal chairs and a nice wooden floor.

They gave us so much food that we got a to go box and put up the soup and the pita and the potatoes and the beef and lamb kabob.

We had the cheese pastries for appetizers. There were two of those that we ordered. My review partner had regular coke but said it tasted a bit weird. The soup came in little plastic or ceramic type bowls with handles.

The kabobs also had onions on the side.

I felt that as soon as I got the food that I knew we had ordered too much. I probably could have eaten just the cheese pastry and my tea. Or I could have had the pita and the soup. I tend to over-order at most restaurants and so I tend to get too much. I was able to only eat about 1/3rd of the plate that I ordered. For the amount of food and price I think it was a good restaurant. We left a 18% gratuity.

Before we went to the restaurant we had checked out several reviews online and some people said that the place had some curt or abrupt rude staff but I didn’t find that to be the case and neither did my other review partner. My review dinner partner thinks that perhaps it’s just a culture difference or language barrier or something else that makes it seem like that.

I was indecisive at first at what to get from the menu and so had for the waitress to make a second round to come and place an order. It felt like a long wait but was just simply cause I wanted to get the order in as soon as possible.

The red sauce seemed sort of like a type of salsa and tasted sweet. It was okay but just seemed like a watery tomato sauce of some kind. It was okay but I didn’t think it needed to be sweet.

My reviewer thought that the potatoes were amazing and they had just the right amount of crispy outside, soft and warm tender inside and garlic, butter, and parsley type seasoning and not covered in hot spices. We probably could have had several servings of this because of how good it was.

The cheese pastry was warm and soft on the inside with a bit of cheese filling and flakey on the outside. It was pretty good and tasted a bit like a flaky turnover. Cheese pie (khacapoury) puff pastry filled with cheese.

This restaurant also has borscht soup and various other items not typically seen in traditional menus. They also had chicken kiev and beef stroganof at the time we were there.

The crowd was of a diverse ethnic background and there were plenty of a older and younger demographic. There also a kid or two playing in the restaurant happily.

Here is a picture of the menu.