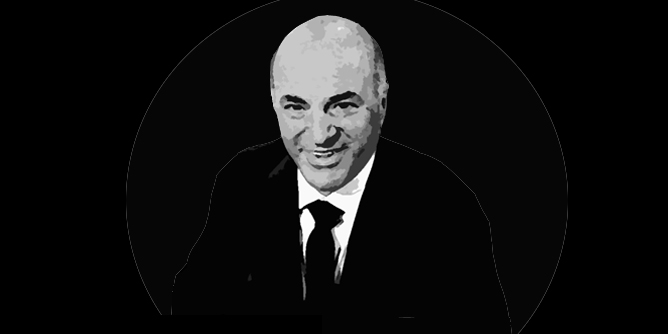 Kevin O’Leary aka “Terence Thomas Kevin O’Leary” was born in Montreal Quebec Canada. He’s a businessman and best known for his appearances on Shark Tank as well as his business products developed under the company SoftKey. He is an author and television celebrity. He has been on several shows including Dragon’s Den and making many television, web, and podcast appearances. Mr. O’Leary has also helped to co-found an investment product called O’Leary Funds which are an ETF based product that emphasizes the power of compounded reinvested dividends in a diversified and balanced investment portfolio.

When Mr. O’Leary created his SoftKey products it was tailored toward family education and entertainment and he also acquired additional companies such as The Learning Company and Brøderbund whereby he later changed it to the The Learning Company before it was acquired later by Mattel and became a multimillionaire. This company was created in the basement of his home selling CD based products for PC’s and Macs. His mother also helped provide an initial investment in the company. Most of these CD’s contained software based learning products that emphasized reading and math and also various acquired freeware, shareware and the popular WordStar wordprocessing software.

In one of Mr. O’Leary’s interview with Kitco, a precious metals investment company he explained that the ETF investment idea of O’Leary Funds was inspired partly by his mother who was an adept investor. She had divvied up her weekly paycheck such that a third of her income went into large-cap dividend paying stocks as well as interest bearing bonds. Because this portfolio was never talked about while she was alive he was surprised at how well off she was after she died and the will became known and executed. Thus Mr. O’Leary uses a lot of the same concepts of investing which involves making sure to save a good chunk of your pay for investing and not spending later on. This investment product is available as part of the O’Leary Ventures private venture capital investment company. Some of his advice he has given includes his love for diversification, which he has called “the only free lunch” that one gets in the business world of investing. He also recommends only using the growth from dividends to live on and never to touch the principal, as well as, using good fundamental asset allocation and not being too heavily weighted in any particular stock or asset class or sector.

According to Wikipedia, Mr. O’Leary also wanted to do photography before he attended college. He also worked at Nabisco for a period of time as well as a television producer that produced sports related content.

He has also diversified and parlayed his skills into fine wines and books and real estate. One of his most popular books written includes his “Cold Hard Truth: On Business, Money & Life” as well as his follow up that involves Men, Women and Money where he covers topics that includes relationship and family and investing and debt.

On TV he often is seen as very direct, blunt, and no B.S. because he wants to teach people the world of business and that it’s strictly about money and profits, not emotions and feelings. Often he is referred to as “Mr. Wonderful” in an ironic twist to his perceived meanness which he spins off as actually being a good quality because sometimes a person has to be told the truth even when it hurts so they aren’t blinded or left in a fantasy world. Someone has to be the truth teller to get the contestants on the Shark Tank to learn life and business lessons and that’s how his nickname came about – when fellow TV investor, Barbara Corcoran, told him “well aren’t you just Mr. Wonderful?”

Mr. O’Leary also has a style of investing that prefers taking percentage of future revenue rather than shares of a company he invests. Some of his investments include a tea company and photography based companies.

Mr. O’Leary said one time in an interview that he stopped working for someone else one day and started working for himself when he had an eye opening experience on his first day at a job as a teen. He had gotten a job at the mall at an ice cream shop across from a girl he had a crush on and his boss told him to scrape some gum off the floor. Indignant and worried how embarrassing it would look to the girl on the other side of the mall he retorted that he was hired to scoop ice cream and not scrape gum off the floor. He was terminated because of that and took a blow to his ego but it taught him a lesson and he vowed never to work for someone else again so he could control what needed to be done and salvage his pride.

Mr. O’Leary also has struggled with dyslexia before, as have some of his fellow Shark Tank investors which include Barbara Corcoran and Daymond John according to Entrepreneur.com. Mr. O’Leary claims it is a super power because it has helped a lot of people in business overcome and succeed in business due to different perspectives, the ability to figure out how to read in different ways and it forces one to focus on yourself and the task at hand over and over again.

Mr. O’Leary is clearly an inspiration for many and has also spoken at the Richard Ivey School of Business at The University of Western Ontario as well as Notre Dame and many other schools in mock Shark Tank scenarios in helping college students prepare for real life in the business world. Here you can find a clip of his lecture and seminar: https://www.youtube.com/watch?v=gwn1ADDkJYM

Mr. O’Leary is married with two children and lives in Toronto Ontario. He’s a wine enthusiast and a philanthropist.

If you haven’t studied or read some of Mr. O’Leary’s works and success tips we strongly encourage you to do so. Thanks for your contribution to the world of business Mr. O’Leary!