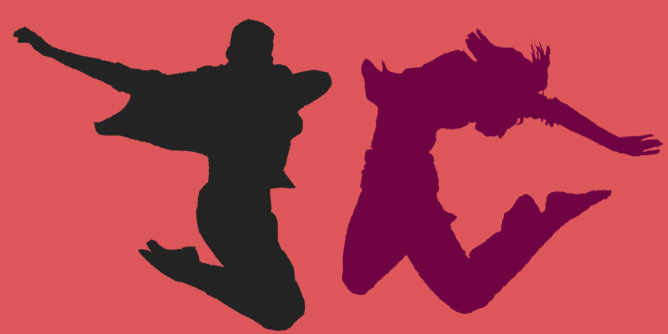 Dance is a style of movement and performance art form which has cultural and aesthetic significance.
The way one dances reflects regional, historical and ceremonial differences. There are theatrical based ones as well as competitive and social ones. And one could likely argue society formed and developed through was of communication not only verbally but through body movements.

There are various styles of dance that include kizomba, salsa, ballroom, bachata, waltz, fox trot, breakdancing, ballet, folk dance, line dancing, free style and many others. Dance is one way to connect with another human being and convey emotions not able to be conveyed through text meanings as it is three dimensional, has grace and speed and sometimes even erotic or hypnotic. For a good part of time also in some countries certain styles of dance were seen as forbidden but what is the difference in ethical body movement between a plié versus a swing dance jiggle? Often it’s subject only to the whims and fancy of a particular group or culture at a particular place in time.

Dance is often coupled with music although not always to give rhythm or some types of dance like tap dance may have its own sounds and rhythms. There are also various jigs, discos, tangos and hip-hop styles that have evolved over the years. A person has to keep up to the rhythms which is not only fun but also good for one’s health and also has social benefits. Some video games have taken this further with music and the fun graphics and animations to make it fun for people of all ages. Dance may have evolved as a response to rhythms and music as it was a poetic response to beats and often primitive cultures.

Many dances are made for couples such as tangos, ballroom and waltz although dancing instruction is very flexible and you can often go to a class with instructors who will pair off with even numbered participating couples or if there’s and odd number the instructor will switch between the single individuals.

Certain types of dances such as ballet grew out of dances in dramatic productions in Europe during the 16th and 17th century to accompany narrative dramas and orchestral arrangements. Kabuki style Japanese dances use various stage pieces, characters, masks and theatrics to create a certain dance and drama production.

In some cultures dances have culture significance such as at weddings or for religious or spiritual reasons as well as for celebrations. Indian and Asian as well as African styles have been know for their abundant richness of style and celebration of the seasons and ritualistic teachings.

Some dancing is used in musicals typically such as Cabaret or various performers such as for West Side Story. Europe dancing styles include maypole dances that encourage group participation as well as polka. Some styles of dancing like the traditional chicken dance is also used for celebration of the change of the seasons and the chance to enjoy the harvest also. Other styles such as Irish dancing use mostly the lower part of their bodies in movement.

Dance is also integral to many Latin American regions with large bands and jazz. The more well known ones include merengue, bachata, tango, and samba. The styles help create a group identity among the people of a certain cultural and ethnic makeup. In fact even in America most people and youth are trying to connect and form an identity and the ability to dance and come together through this activity is a great benefit to one’s esteem. There are various art and humanities classes that offer choreographic studies, dance notation classes and movement studies such as with Laban notation as well as therapy classes.

Since it is so popular it has become a sport and there are many competitive activities available. Often a person signs up for a class and gets a coach or teacher. A popular television show includes Dancing with the Stars which features various celebrities competing to music and matching rhythms and styles. At the end they are judged by three referees on the quality of performance, aesthetics, style, and execution. Sometimes you can find these programs for you or your child in school where by they can engage in tournaments. During dance often elaborate costumes of various colors, fabrics, and materials which may involve sequins and buttons may be used. Some styles have long flowing fabrics while others are highly casual street style wear.

Dance has an especially high value in television and drama as well as music videos as something visually appealing to watch. Many parades, cheerleaders, figure skaters, and other athletics incorporate this into their routine as well.

Some recent dances include The Floss, the Dab and other variations. Some dances are made fleeting and become a fad also depending on the music and popularity at the time. Some dances include The Locomotion, or the ones for Mambo Number 5 or even the Livin’ La Vida Loca dances. Some are popularized by celebrities like the Carlton which was popularized by Alfonso Ribeiro or “notorietized” like the twerk by Miley Cyrus.

Whatever style you pick it’s important to have fun and learn.
-You will make more friends because you’re being social.
-It is great cardio and exercise, just don’t hurt yourself doing it!
-You might meet your loved one while doing it or get a date out of it.
-You will be more active in the community.
-You’ll improve your self-esteem and be confident with yourself and body.

Go out and dance like Baz Luhrman says in his song from Everybody’s Free to Wear Sunscreen: “Dance.. even if you have nowhere to do it but in your own living room.” Dance like nobody is watching and “Enjoy your body / use it every way you can… don’t be afraid of it, or what other people think of it / it’s the greatest instrument you’ll ever own.”

Many cities offer places to dance for free at concerts and festivals and public outings. Some classes are only minimal between $25 to $50 for a starter class and possibly more. The reason dance is so popular also is that it’s healing and many have found purpose in their lives in giving that joy to the younger generation and it has helped them live ripe into old age. And you don’t have to worry about having a partner to do it either.