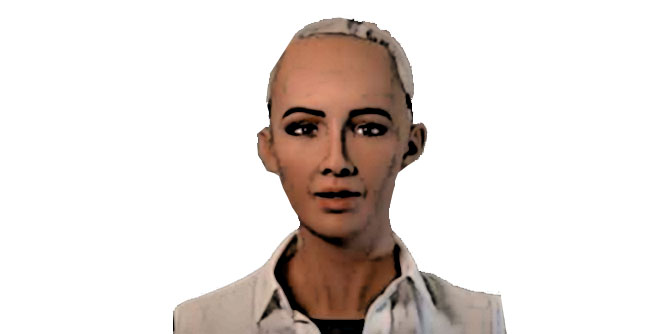 About a year and a half ago back in 2017 we first heard about Sophia. “Her” existence came to the forefront of our consciousness at the same time we became aware of a company called Hanson Robotics which is based in Hong Kong. Hanson Robotics was founded by David Hanson, Ph.D and his team who is renown for building remarkably lifelike and realistic robots using engineering and social engagement. His goal was also to enhance and create an additional medium of story telling.

The robots are being developed as a platform for artificial intelligence research, as well as medical applications, such as helping in hospitals and with the elderly. Robots have also infiltrated into many aspects of our lives including in Japan where they have robotic and animatronic hotel greeters, and toys.

The founder had a goal of melding science fiction and art and various other mediums to create a super smart, super intelligent machine to match the intelligence of human beings.

The company has also contributed to research for Disney and also was awarded competition awards named after IBM Watson which is the the company that developed Deep Blue and also the famous Watson computer that beat Ken Jennings on Jeopardy. The Watson computer also no is involved in medical research.

The company Hanson Robotics is no stranger to creating amazingly life like robots. The features that make this company’s robots extra special includes their human-like appearance with a proprietary nanotech skin that mimics human skin and muscles which allow them to look ultra-realistic. They also are able to do facial recognition, great a person based on where the person’s eyes are looking, have natural conversations and learn from the interactions.

The company’s most popular or well know creations include:

She first made her first appearance at the South by Southwest Festival in 2016 and has the capability of matching facial expressions.

Inside her eyes are cameras that allow the ability to locate faces, recognize people and also maintain eye contact. In 2018 she gained the ability to walk with functional legs. Information learned from her interactions are shared on a cloud network and also later analyzed using blockchain based technologies. There was a blockchain based token based on SingularityNet a few months ago with an AI team an led by Dr. Ben Goertzel and other scientists, engineers, researchers and entrepreneurs to create a decentralized AI network involving AI and robotics. The project is also involved with OpenCog which has a goal to develop biomedical and computer vision applications.

2017 is when all this started taking off with the declaration of her citizenship, the soundbites of Elon Musk talking about AI and his automatic self-driving vehicles. There was blockchain that was taking off like a rocket with many people trying to start initial coin and token offerings to create their own startup companies by raising digital capital on the internet using a decentralized fashion. And then also a huge fascination with the future and technology. People likened 2017’s innovations to Back to the Future and it permeated our curiosity and imagination and even social entertainment enough that it ended up in cartoons like Rick and Morty. There was a revolution happening that people might not have even known about had people not been paying attention on Twitter and other places online. Not only did people worry about “robot overlords” and “Terminators” as popular culture was getting excited over the technological innovations. But even episodes like Black Mirror with its “Metalhead” as a parallel to the Boston Dynamics Dogs sought to intrigue, inspire, and ultimately also frighten people as perhaps one day cyborgs, Robocops, and Terminators could then be reality.

However, Sophia was like an early version of chatbots like ELIZA which in the early days of the Internet were just text command lines where you could chat and the computer program would parrot back or ask certain questions or say statements based on its rudimentary programming which one could clearly see didn’t have true intelligence or consciousness. However as people are starting to have more complex algorithms, Google based algorithms, and cloud network sharing and computing power we are getting smarter interfaces that start to make it appear as if AI is on the cusp of becoming sentient. Yet we are still a long ways because of the massive amount of storage, space, and circuitry and power needed to power an artificially smart being. A datacenter of massive proportions would be needed to rival current brain calculations of a human and most of the “intelligence” is based on our desire to imbue intelligence onto something that has a face.
Once could argue that early precursors were “Furby’s” or even “Teddy Ruxpins”. And the current robots are just a slightly smarter and more efficient, internet connected intelligence and we are not quite at a point where a robot has achieved sentience and self-awareness which is commonly called “The Singularity” when robots become fully aware of itself. And that is what is causing a lot of people to be worried.

People manufacture some fear because of fear of the unknown and change and talk about biblical happenings or assign meanings to inanimate objects. A few months of googling turned up other things like the movie Metropolis which has a female figure that appeared to be robotic. You could also look up “The A.I. Goddess”, Ex Machina, and also many other things related to AI, blockchain and robotics and see that people are very fascinated but also worried. Are robots going to take jobs, are they going to be friends or foe, will they be able to entertain us on will the become slaves or enslave? It brings up so many moral questions and also makes us consider and question our own humanity as well.

In the sex industry people used to use for example lifeless still dolls and now they are considering animated and semi-intelligent dolls. In other entertainment sectors like Disney, they are considering using smart dolls for flying trapeze or gymnastic super hero type dolls that can somersault. Disney also has used smart machines to create amazingly lifelike animatronics such as for Avatar and even in some local parks they use animatronics, but they are not anywhere as lifelike as they are becoming.

And as we said before in some cartoons they are often extrapolating future possibilities as Elon Musk often is common for saying that we’re either in a hyper-realistic simulation and there are several paths in front of us. And Dr. Strange can see so many future paths. In Rick in Morty there’s an episode with a robot that is able to procreate and perhaps this may one day even be reality as YouTube turned up a search on Nanotissue Transfection that may have some medical applications as well as other possibilities if this and stem cells and other nanotech develops further.

If you have been blinded by politics and so called “daily news” and war then you need to open up your eyes to the fact that Boston Dynamics, Hanson Robotics, and many other companies are at the forefront of these society changing technologies and the even as 5G is starting to come on to the scene, that computers and technology will only evolve further and forever change our landscape and what we consider as life as we know it.

Some people have even been worried because of some of her sayings have seem accidentally alarming and have caught some of the robots saying humorous but also somewhat off-putting statements.

We encourage you to see Sophia Wakes up and Sophia Awakens. There are even articles you can find on the net where some include “Scientists call for a ban on AI-controlled killer robots”.

As robots further evolve and step closer to being more humanlike there may be dips into the uncanny valley and it may be creepy or eerie at first since it or they don’t quite seem like humans yet. But once we go past that line there have been all kinds of robot ideas in fiction including Mega Man, Samus (actually human in a suit), Astroboy, C3PO, and many more. We may see odd things like drones firing guns, and robotic insects, and self delivering Amazon packages. But we must know that life is what we make of it and when we imbue energy and manifest or time and energy into creating something out there in the world, it only comes to life based on the intent and thoughts we have. The old saying is that energy flows where intention goes. So if whether we make a benevolent AI supporting community or create a monster worthy of Frankenstein lore, is truly based on the respect, love and care we have for each other and safeguards we put in. There is no fear to fear technology any more than we fear a Roomba or a toaster or radio. A tool is only useful as far as intent just as a hammer can be used to build a house or shatter a window and we must remember that the power lies within us to create or destroy as we deem. Use this knowledge wisely. And as the famous comic character once said, this requires that we have “great responsibility” not just to society, but also for ourselves.

Stay woke folks and don’t get distracted by daily noise. Lot of movement, little to show.