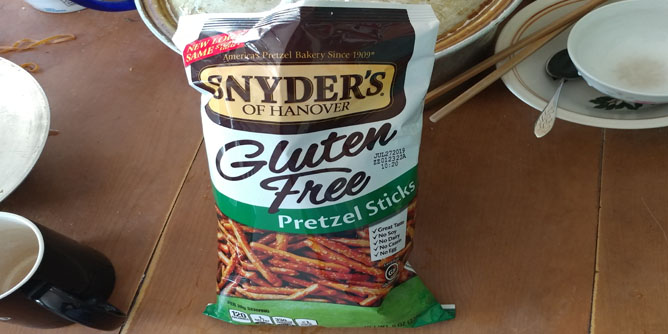 The other day I went into a local Walmart to get some inexpensive snacks and was trying to get something that would be relatively safe, delicious and not inflame any major allergies. I remember about half a year ago I had gone into the Walmart and asked to see if they had any pretzels that didn’t have wheat in them and the representative looked and didn’t see them but said he would asked the manager. At the time they didn’t have them but fast forward to today and I found some Snyder’s of Hanover Gluten Free Pretzel Sticks.

This was good news that Walmart was actually listening to customers and doing their best to commit to some standards of quality to ensure customers keep wanting to come in and shop at their stores. The pretzels were less than $3 for an 8 ounce bag. On Walmart’s site they had a blurb that says that Snyder’s of Hanover is offering gluten-free snacks as an option to millions of people that have celiac disease or trying to follow a gluten-free lifestyle.

For those that are not familiar with celiac disease, it is an autoimmune system disease which affects certain people that are genetically predisposed to this condition whereby eating gluten-containing foods causes damage to the small intestine. The body mounts and attack against the person’s own body and the normally healthy and long villi in the small intestines become atrophied or shorter and damaged and nutrients aren’t absorbed normally or at all. This can lead to serious health problems for individuals. According to the Celiac Disease foundation 1 in 100 people are affected worldwide and 1 in 10 people have a risk of developing the condition.

Granted a lot of people are jumping on the gluten-free bandwagon, but it actually can often make sense for people also trying to be careful about carbs and other types of food intakes. These pretzels are made with premium ingredients as the text continues and the bags contain no gluten, dairy, egg or milk and are alternatives to wheat based products. Although they may contain a slight amount of soy.

It is interesting to also note that the products have a disclaimer that they are not the same as Snyder’s of Berlin. When I checked the ingredients they list corn starch, potato starch, tapioca starch and palm oil and dextrose as the majority of the ingredients but they also have cellulose gum, baking powder, salt, citric acid, yeast and soy lecithin. More ingredients can be found on the actual packaging.

The nutritional information says that it has about 4% of your daily fiber, 11 percent sodium, 3% of saturated fat and 2% total fat. Calories are about 110 Cal. It doesn’t seem to be a bad product at all. Most pretzels have an insane amount of salt especially big huge twisted warm pretzels that you see at the fair. I recall when I was younger that there was also an episode of Mr. Roger’s Neighborhood where they did a making of pretzels in a factory from the Picture Picture device they had on there. And Mr. Rogers learned that the salt was not very healthy.

But this pretzel in my review has two things or more going for it.
1) Terrific bite and crunch. Most regular pretzels have a crusty taste or burn to them. This had no burnt flavor and the crunch was everything I wanted from a gluten-free pretzel. 5 stars in my opinion. This was the number one thing that got me craving for it enough that I bought me a second bag of it already.

2) Not overly starchy and falling apart with flour bits. I grew up eating wheat pretzels all my life. There was the Shure Good Brand and Snyders and flat pretzel thins from The Snack Factory (also quite tasty but a bit salty). But they all had a slight starchy inside. This one didn’t feel like crunching into a flourly wheat pretzel at all. Very clean smooth taste that wasn’t very dry.

3) Not burnt or overly salty. And slightly addictive even without the salt.

Most of the time pretzels are great for when you just want something to snack on but don’t want chips and their greasiness and you don’t want something else that’s as unhealthy but need a bit of salt. Pretzels sometimes balance that and can fill you up some too. These pretzels are just nice. And they aren’t like the twists. For this review we only did the pretzel sticks but I can imagine the twists would likely have the same crunch.

Give these a try next time you’re wanting a crunchy not sandy pretzel that’s smooth in your mouth.