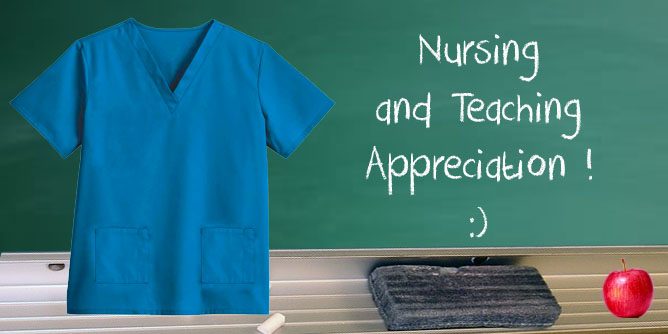 Ever since we were born there were two service professionals that are near and dear to our daily lives and are some of the most trusted professions throughout the world. We celebrate them in the States.

First we’ll talk a little about nursing.
Often we don’t see the nurse unless we are sick or getting a check up. Most of us see these gentle giants when they first start off in school also while getting their vision checked. According to the American Nursing Association there are around four million registered nurses also known as R.N.’s.

We started celebrating these people at lease nationally in 1993 and these professionals are often one of the most helpful and trusted people as they look and take care of us, our family and others when we are sick and they are down to earth people that have to deal with a lot and are often underappreciated for the type of work that they do. This year the week ends on May 12th which was also the birthday of Florence Nightingale also a nurse famous for pioneering modern nursing. She helped train nurses and wounded soldiers in the Crimean War. Her claim to fame is the establishment of a nursing school in London. And also International Nurses Day is celebrated on her birthday. She was also a vast writer, a social reformer, a expert in medical practices and knowledge. And she also used simple writings and statistical data with pictures or infographics that made comprehension easier for people that were not great in reading and writing. In this according to Wikipedia she was a “true pioneer in the graphical representation of statistics” and created diagrams and illustrations that were similar to histograms.

She also likely gained some philosophies of equality from befriending Mary Clarke in Paris. She also was very studious in the fields of science of nursing and art. She helped to standardize some basic hygiene practices such as hand-washing which helped cut death rates by 40%. She also helped improve living conditions, nutrition and working conditions for medical staff. Sanitation was a major tenet that she advocated. She did studies about sewage, overcrowding and air quality. Proper training was also provided to those providing nursing care so that there was again a standard protocol which had not been the case before. Her ideas also helped train nurses from those in the American Civil War as the idea of properly trained nurse care was inspirational and helped establish high quality schools which later through her mentoring people such as Linda Richards helped to establish nursing schools later on in America and overseas in places such as Japan. And she also helped establish a certain code of conduct and ethics.

Her work in the earned her a medal called the Royal Red Cross which was awarded to people that had done exceptional service in nursing in the military.

So nursing is essential to people and communities to help them maintain health and a good quality of life. They are essential for patient care. Often nurses help physicians and may have certain abilities and authority to handle prescriptions. Some nurses also have a bit of independence.
They help work with physicians, therapists and the family of the patient as well as patient to create a plan for the best care.

Nursing care has evolved to from a male profession, to people that were of religious orders like monks. Later on an official school of nursing was established. An example of not just a nurse but also one of the first teachers in America was Clara Barton who was also a nurse. Oddly enough what was a few centuries ago seen as a male profession evolved into a field dominated by women around when World Wars occurred. And then more recently it has shifted back toward a gender-neutral profession. There are various areas of study, licenses and degrees that must be obtained to be trained in administering care. For example there’s an NCLEX test in the United States. And most often the degrees can range from 2 to 4 years worth of study.

Nurses often have to do difficult jobs involving washing and bathing patients, helping a patient excrete and eliminate waste and helping them move around. Often they don’t prescribe meds but they may assist patients for medicines that are actually prescribed. It is an exhausting, stressful full load job that often requires long hours, exposure to illnesses and sickness, continuous learning, and often can cause burnout or emotional exhaustion.

Nurses are at the front-end of care and often take the brunt of interaction with patients and often more accessible than a doctor. And so if you see a nurse, appreciate them and thank them for their service.

Now teachers are often also very trusted and critical jobs.
They deal with a lot of stress and are in the front line in ensuring that kids and the future adults are smart and well armed in skills and abilities to handle life as a fully functioning adult. They are our mentors, our leaders, and people we generally respect and look up to in order to guy us in steps throughout life. And they are also instrumental in guiding and showing us often moral codes of conduct.

Often there is training that is giver throughout life even as an adult and just as we may need health and care in nursing, we often rely on teachers to give us insight and knowledge about how the world works and interacts and give us the right answer and inspire us. Training can be formal classroom or informal. And sometimes there are people homeschooled as well.

Originally customs and knowledge was passed down orally and through stories about things that need to be passed down from generation to generation to keep critical knowledge alive including moral and social values as well as knowledge. Schools gradually came into existence and schools of thought such as with Plato, Socrates, and Confucius came about. Later there was a revival of learning during the Renaissance and development of printing which allowed the rapid spread of ideas. This made art, science, religion and philosophies proliferate around that time.

The general model of schools has people in a primary or first level of education for about six or so years of school. Then there is a second lever for people that are teens as they transition toward potentially higher educational levels in preparation for vocational or college level classes. This may vary based on country but most often the higher levels are not mandatory but younger levels are required.

Because of the skills needed to have workers that were more skilled in certain fields (including nursing) this second tier of education gradually developed due to this need. And sometimes the additional schooling is not free or may require fees. Often there are at least 2 levels of school and a third level which is for college or even a forth level for graduate level classes.

And then at the high levels a person is competent enough in various subjects that they in tern teach others. Not everyone is suited for high level courses however based on a person’s skill level or mental capabilities. And some people want to immediate go into work and practice a trade. For example a person might want to get into farming or carpentry or automotive and may need certain skills applicable to that particular profession only. And this is often a vocational education.

Teachers are remarkable people in that they are patient and smart and have to deal with people that may not always want to be there or disruptive kids. But they continue to be professional and teach the best way they can according to a curriculum to prepare them for life or state tests and licenses and college. They teach people of all backgrounds and diverse groups. Sometimes they have to help people with disabilities or special needs and tutor them and give them extra attention.

There are also other types of schools that formed because certain people were dissatisfied with the educational system and content or the way of teaching. There are also religious based schools and now classes that can be taken remotely online or self-directed. And there are also studies about methodologies of learning.

Teaching has become a big business and universities get quite a large group of people and students often compete to enter a school or get scholarships so they can learn a particular trade. Ultimately the education is often to help them get a job or career but there sometimes exist people with a lifelong desire to learn.

An example of a teacher was again Clara Barton. She was a school teacher in the 1800’s and got her first teacher’s certificate at the age of 17 years old. This profession gave her the confidence, the skill set, and drive and motivation to overcome he shyness and break out of her shell for the greater good. Isn’t that what nurses and teachers do after all? Bring out the best of us?

Ms. Barton was able to handle rowdy kids having been around a bunch of boys when growing up. She was an excellent writer with a style that was easy to understand. She also helped to open one of the first free schools in New Jersey and educate others on teaching.

During the Civil War she was instrumental in the war effort by consoling soldiers, help them write letters and provide basic nurse and food care for the soldiers. Her work parallels Florence Nightingale and she was often nicknamed as the “Angel of the Battlefield”.

She was also became associated with the suffrage movement and civil rights and became a representative for the first American Red Cross.

Obviously there is a lot of amazing history here from the people that came and contributed to the world. Without people like her and Florence Nightingale or even teacher like Helen Keller, the world would be in different place. We need mentors and leaders and visionaries to help guide us and make us strong and inspire us and keep us going. And that’s what this week is about. Emphasizing a few of the professionals that have helped shape us, built us up and kept us strong.

If you see a teacher, thank them for their patience and taking the time to pass on their knowledge and wisdom.