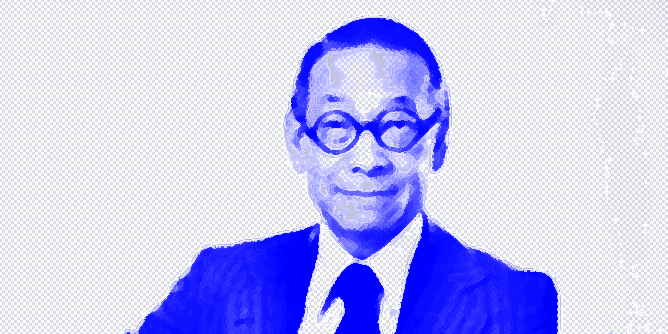 I. M. Pei also known Ieoh Ming Pei was an Chinese American architect. He helped to revamp and build the Louvre museum’s iconic glass pyramid. He was born in Guangzhou and raised in Hong Kong and Shanghai and later moved to the U.S. His building designs have dazzled many people and was often revered for his exciting and rebellious designs. He is revered around the world for his other iconic work including New York’s John Hancock tower which is said to be at least 700 feet talk, his work at the JFK airport as well as other buildings such as the Mesa Laboratory in Colorado which was one of his first works that he became widely known for. Most of his designs had a modern feel to it and he created many building designs in his lifetime.

He also helped to design the Bank of China Tower in Hong Kong as well as part of the National Gallery of art. He was instrumental in designing the Museum of Islamic Art in Qatar as well as the Miho Museum in Japan. While he does have his share of critics, due to his contributions and work he won various awards including a Nobel Prize of architecture, a Lifetime Achievement award and Pritzker Prize.

Pei had a penchant for art and beauty while growing up that strongly influenced him including his interest in structures and gardens of Shanghai.

He studied at the University of Pennsylvania after moving to the United States and also had a fascination for film, design, and engineering. He studied also at MIT where he learned fundamentals about form and function and building construction techniques.

He also networked with some folks in the landscape architecture program while at Harvard where he met his future wife Eileen Woo. After college Pei would go on to start his own firm. Pei helped design other influential pieces like L’Enfant Plaza in Washington DC. And also Luce Memorial Chapel in Taiwan.

Pei’s personal favorite project was likely the National Center for Atmospheric Research was which he designed to capture inspiration from time that he spent among the surroundings and nature when he was younger and drew much of his inspiration from mountain retreats.

He was also selected for the John F. Kennedy memorial Library due to his eye popping designs and was personally picked by Jacqueline Kennedy for the project.

Mr. Pei did work in Rhode Island, Georgia, Dallas and Oklahoma. He did work for the Hancock Towers that finished in around 1976. One of his best masterpieces was the National Gallery East Building for the Art Gallery in DC. And he has worked on the Everson Museum as well as the Macau Science Center in China. Another iconic piece was the Rock and Roll Hall of Fame in Cleveland. At MIT he helped with building designs for the Earth Sciences building.

Mr. Pei used a lot of modern styles with geometrics and cubist shapes and themes with a bit of classical and contemporary with influences from Walter Gropius, Le Courbusier, and Marcel Breuer as well as Aalto. His knowledge and skills were invaluable not only to museums but real estate developers who liked the clean designs, the modernism and the simple geometric and classic shapes. His designs were timeless He also received the Gold Medal of American Institute of Architects.