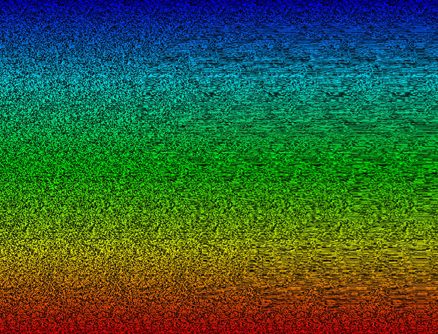 Note: The top image may be compressed so might not view correctly.

Stereograms, also know as autostereograms are single images that create a visual illusion of three- dimensional imagery from two-dimensional imagery. It all comes into play with the focus and angle of one’s eyes which causes a part of depth perception due to the different perspective of eyes.

Commonly repeating patters of separate images create a static single image which when viewed at the right angle and distance causes certain patterns to appear to float above or below the surrounding background imagery.

The best know autostereograms are the Magic Eye books that came out in the 1990’s and used a series of random dots.

One way to get the right view is to either cross the eyes and move the image back a certain distance. The other way is to stare at a far away point with eyes staring at a parallel angle.

The science behind these optical illusions were discovered and improved on by Charles Wheatstone and David Brewster as explained by Wikipedia. As the technologies were studies and computers became more prevalent software was able to be used to create these pictures faster and more readily.

The distances between repeating patterns create a depth of perception in the brain.
There is also a slight difference in doing cross-eyed viewing verse what is called “wall-eyed” viewing in that cross-eyed viewing tends to create a revese of the picture.

The advantage of random-dot is the ability to produce fine smooth gradients.

An even cooler technique of creating stereograms now uses 3D objects instead of flat patterns and can really may some images pop.

We spent the last few days trying to come up with a stereogram using software and it wasn’t easy. It seems that images that are 3D models already with proper shading make your work go faster in creating stereograms. We tried using a few programs like Stereogrammer and Stereogram Maker and it was hit or miss with our versions until we realized that we needed more contrast. We took our logo, desaturated it, added light filters and tried plasticizing it in Photoshop as well as inverting colors and experimenting with colors, gradients, and shadings.

In the end we decided to find some basic 3D images to tweak and seamless wallpapers to work on making our own stereogram.

Here are some of the images we created. Can you see our images?

It is a bit fuzzy and I tried looking at it for a while and couldn’t see every fine detail but it still was an interesting experiment.

We also learned that you can change logos to SVG vector format, then use Inkscape to create an SVG file by “tracing the bitmap” and then saving it, importing to Blender to extrude faces and create an .OBJ file and then make a 3D logo. Lot of fun can be had with images and file formats.

Can you see our images? Tell us more about the best stereograms.

Here was our base image.