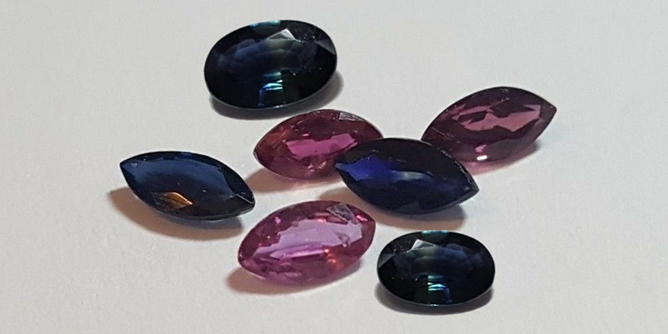 Since the beginning of time people have been fascinated with the beauty and supposed mystical properties of gemstones and precious metals.
They have been intrigued by the deep green hues of jade, the honest blues of sapphires and sparkling reds of rubies. Other gems like topaz, amethyst, diamonds, pearls and bloodstones have captured the imagination of people around the world.

They have taken to decorating with emeralds. They have been drawn by the shiny luster of gold, silver, and copper. And they have marveled at the useful properties of these malleable and somewhat sturdy precious metals.

Many of these gemstones have been assigned to certain months based on astrology. For example:

And for gold it has been associated with the sun and its association with the male divinity. It has been used by royalty and rich people. Due to it supposed rarity it is highly valued and can only be mined at its finite amount. It is nonreactive and does not tarnish or corrode and is highly malleable. Just a small amount can be used to make jewelry and tools and coins. Gold is said by some to be a wealth attractant or wealth multiplier. It is said to be used as a financial hedge. And usually used as a store of value when there is economic uncertainty. Most everyone and ever country innately knows that it appears to have value.

Silver, the lustrous grayish metal, is associated with the moon. It has antiseptic qualities and has been said to kill mystical beasts. It is useful in medicine due to this antiseptic quality. In the financial sector this is the second brother to Gold and often also a means of financial investment. And it is often used in mirrors. It has typically been between levels of 15 to 20 dollars and at times 30 to 45 dollars at peak. A lot of these have been financially regulated and the ratio is sort of set by monetary policy.

Jade is said to be healing and there are various shades including green and white and purple jades.

Pearls are elegant and have been worn by distinguished ladies throughout the years. The simplicity of a pearl and understated classic beauty is timeless. And they are formed from a stray foreign object inside an oyster shell.

Sapphires are blue and often small. But they are excellent for ring jewelry.

Rubies are bright red and often seen as a symbol of mystery and power.

Another fascinating thing about the study of these gems, minerals and stones was that it sparked the early study of chemistry. In the ancient world there were seven important metal elements in world of alchemy. These included gold and silver, mercury and copper. And then there were also lead, iron and tin. Gold and silver were of course the most valued. Mercury was dubbed quick silver due to it being the only liquid metal and people used to play with it not knowing its toxicity could be absorbed in through the skin. Copper was great for metallurgy and smithing. Iron and tin were also valuable due to its durablity. Tin had its “cry of tin” or crackling when bending it. And lead was the heaviest metal and heavier than gold and some alchemists thought they could turn it into gold due to its oxide powder being yellow in color. But they didn’t also know in early Roman that the lead plumbing ended up producing systemic poisoning until years later.

Another neat mineral is Pyrite which is hard and has blocky shapes and also quite heavy but not valuable in the same way as gold. It has a bit of iron ore in it and is said to be able to create sparks if you strike certain metals against the pyrite. Pyrite also can react with water and certain other things in the environment to create a sulfuric acid which is why you have to be somewhat careful when handing gemstones and metals as they can be irritants also. If you aren’t careful you could be handling a potential toxic substance. Look up on the internet “gemstones and toxicity” for more information and there is also some information on people that get contact allergies such as from metals like nickel.

Certain gemstones like quartz can also be used as “wands” according to lore and stuck in the ground. Often people that are interested in gemstone magic say that they emit certain earth vibrations that can affect your mood and the way you feel. Whether this is true or not doesn’t necessarily matter if simply having the gemstone makes you feel happier.

Some other people interested in gemstones may consider the following. Citrine is good for attracting wealth due to golden yellow color which is similar to gold. Lapis laluzi is supposed to make someone more self aware, compassionate, truthful and get clarity.

Green gemstones are said to be good for attracting money due to similarities of the green hue to the dollar bill.

And for some having a few good gemstones that attract wealth and fortune and abundance and luck can be consider a wealth attractor and multiplier. For some celebrities they also seek out special healers and alternative medicine and guidance to about these things to try to get a slight edge in success.

Now, back to the title of this article? Should you let someone else touch your gemstones? Normally it’s okay to do so but you may not necessarily want someone that’s not vibrating on the same frequency or mindset as you and may want to “reset” your crystals or just not let them mess with your crystals as supposedly they take on the characteristics of the person and can pull in certain vibrations. So some people recommend “cleansing your crystals”. Our site is more for millennials and scientific based communities but we also understand that a bit of fun with crystals is okay. And helps you focus and think about what you want in life such as wealth or a personality trait you need to work on, which is really what these stones do. They have something to hold onto, inspire you and give you something to talk about, open conversations and hopefully attract like energy into your life. Someone who is clued into the fact that you wear a certain color of jade or gemstone may comment on it and you start a whole conversation about it. It can give you hope and inspiration and in a sense help you heal if its a keepsake from a friend, an heirloom or just something your family has passed from generation to generation. Have fun with them, be mindful and respectful and be inspired.