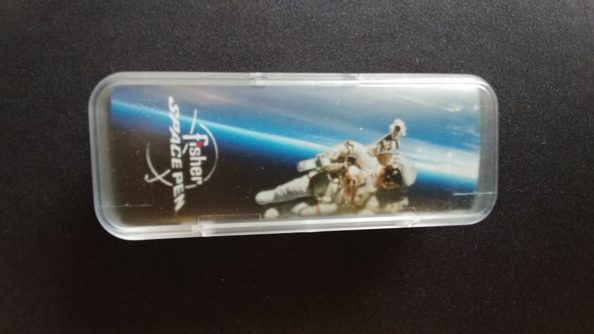 A few years ago I had first heard about the fabled Fisher space pen when looking into dating tips. I had come across a dating guru by the name of David DeAngelo and his dating tips for men but it also had a lot of helpful tips about mindset, mentality, confidence, focus, getting your life in order and also positivity. I had subscribed to some of his newsletters in college and then ordered one or two of his CD sets to “work” on myself. This was just out of college and I had been the “good guy” just going to school, doing what my parents had told me and following expectations. You follow orders, you listen to rules and teachers and bosses and then you would automatically have a good life and life would just naturally fall together and you’d have a wife, a house, and the whole great dream. But real life doesn’t always work that way. And I found myself trying to figure how to get my life in order and also trying to get ahead at my job. I had been fed up with chances with crushes disappearing and I said, what’s wrong with listening to a CD or so and changing my life. Life is short. So that’s where I heard about this cool gadget. You can use it in your every-day-carry.

So basically there’s 3 topics in this article:

First off the Fisher Space Pen was developed to write in outer space. A common legend, maybe it was a joke by Seinfeld or something, was that conventional ball point pen could not write in zero-gravity and so NASA attempted to develop a writing tool that could write in these grueling space conditions and spent lots of money while the Soviet just ended up using a pencil. (Rim-shot! Bada bing bada boom)

This pen was actually developed by a private company during the 1960s. This is a time before a lot of computer modernization changed the standards to where most of the documentation for space was changed to electronic versions. According to Wikipedia they needed rough and tumble durable laptops and most of the computers are IBM and Lenovo Thinkpads which are military spec’ed for special use in space as they required resistance to heat and fire as well as radiation. (We actually like the Thinkpad design a lot as the keypads are excellent and the touch pads are okay and pointer sticks are legend or some of the best on the laptops. The laptops are reliable and durable and built to be able to take a tumble. While they aren’t “sleek metal” they are very stable reliable business machines and easily upgradable, swappable and have easy to understand BIOS’es.)

Anyways, back to the topic of space. Often space requires special tools because stray debris and dust and water vapors can cause widespread system hazards during flight in space. Items could drift into air ducts and other electronics that can cause blockage and obstruction to switches and open and close mechanisms, hatches and rotating equipment. Not only that but there is a danger that stray debris can get into body parts that can cause injury or obstruction. You don’t want a foreign stray Cheeto or Dorito speck to enter your eyes, nose and ears so think about what happens if you sharpen a pencil or if ink spills!

It is interesting to note that cosmonauts even stated that having pencils break in space could be hazardous to flight since 1) graphite technologies could conduct electricity and 2) they can also ignite and burn. Although there have been changes to include mechanical pencils this is still possible to create electrically conductive particles.

Various pen types and also grease pencils were also used with varying levels of success that include negatives such as needing to get rid of wraps surrounding those pencils, and also temperature and pressure fluctuations affecting these utensils.

The benefit of the Space Pen is it is considered a guaranteed writing utensil to write in various temperatures, altitudes and pressures. It uses a sort of gel that has “thixotropic” properties that basically means that until you write and introduce shear or motion to the thick gel like ink it doesn’t flow and is mostly a solid-to-fluid like state. And it takes time to become solid nearly solid again.

You can purchase nowadays many different kinds and shapes and styles of the pen. But the one that is really nice is the matte black bullet style pen that is small and compact and can be had currently for around $27.

There isn’t much more to say about the pen other than checking the website and you can sort of own a part of history since these pens are often used in space and you can get these engraved or as a gift with its own case. It’s nice to think that the technologies that we have now from simple computers and sliderules to pens and Tang have helped us look to the great beyond. We have grown up with Star Trek, Star Wars, and now have a rumored Space Force coming. And Amazon is coming with Blue Origin while Tesla and Musk are looking to explore and colonize space with Falcon Heavy and send a Tesla into orbit. It is truly an interesting time. To think that space and flight came from pioneers like the Wright Brothers and their curiosity to innovators like Robert Goddard. We always need people that are fascinated, inspired, and ready to take a bold leap into the unknown.