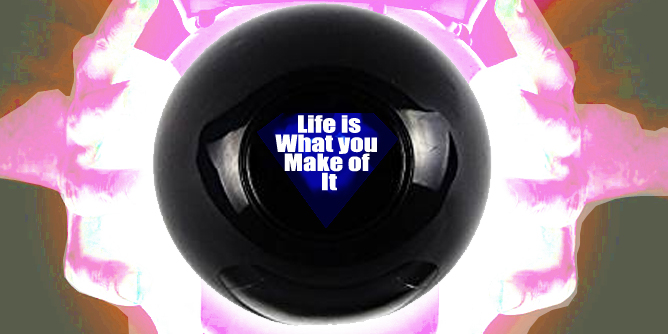 You may have heard of books like The Secret and The Law of Attraction as well as Tony Robbins’ saying a quote to the tune of something like “Where attention goes, energy flows and results will show.” Tony Robbins was trained by a master mentor Jim Rohn and Tony Robbins became highly successful in the world of coaching and life advice and mentoring himself.

Many of these books emphasize the power of positive thinking and confidence building through redirecting energies to your opportunities rather than losses. This is not really some new-age fangled B.S. because it is actually shown by shows and books such as those audiences where Oprah featured successful entrepreneurs and working professionals that they actually think differently. Book writer and coach Steven Siebold also explains that rich and wealth people think about money and opportunities a whole lot differently. Whereas people that have negative (or in some case realist) views of the world. The occasional dreamer and idealist will think and focus on opportunities and not dwell so much on past failures and mistakes that it blocks their path to success.

Siebold and many people have shown that these people:

A lot of people in this world currently are impatient or in a rush to go where they need to go or feel entitlement and have a give-me-give-me attitude or mindset. And that’s why if there’s one thing that you can change about yourself in the current world, it’s that if you win and your brother loses that’s not always the best course of action. Everyone suffers in some way or another in that kind of outcome. This is why there’s a lot of people suffering in this country and seeing clashes and violence and other problems. It used to be that people cared more but you see people so quick to point and blame and cut people off in trafic and jump to conclusions before giving the benefit to your fellow man. But not everyone is as “privileged” as you and sometimes we all have to remember this. Not everyone has two arms and legs. Not everyone has their hearing and sight. Not everyone can read or has the same level of education. So that person that’s idling down the road might be someone’s grandfather or dad you just cut off and flipped off. And all they were doing was trying to find the way to their niece’s birthday party and was lost on the road.

We all need to empathize and put ourselves in other’s shoes and not be so quick to form biased opinions and that’s what’s caustic about some of the media these days as media and movies and cartoons has a way to shape and form our thoughts as we grow up.

Many of us a brought up and raised by the television set rather than an active parent or homeschooled. We often rely on other people to do things: change car oil, run errands, handle our accounting and when it comes to one of the most essential such as raising our kids we tell them to be quiet, stick a lollipop in their mouths, be quite and flip on some puppet show and let them play with a hundred dollar cellphone to do something else. Are we really raising the next generation right with all this lack of attention. Kids crave interaction and friendship and a mentor and just someone that can empathize and that’s what we’re not really giving them these days to experiment and grow. And that’s the problem these days is that there’s no room for experimental play or errors and every “mistake” is magnified across the Internet and social media and broadcast across the country. We glamorize and publicize and sensationalize all the wrong things with society but there is not news about all the greatness and accomplishment in the news. It’s biased.

Know when was the last time we found inspiration and innovation and educational fun and learning? When we visited a museum. We found artists, sculputures. People using their brains again. We found people that were industrious. People trying to better society and make things better. What passes as “news” and television entertainment now is nothing more than “all the bad things that are happening around the world today”. And that’s fine if that’s what you want to think about. But as famed speaker Jim Rohn said he would turn on the news and see all these things about drugs and guns and beatings and storms and the economy going down and then was wondering why he was feeling stressed before his day even began since it was a morning ritual to grab the newspaper and listen to it in the morning.

So he’s a new ritual and request.

If you’re accustomed to hanging around a friend and all you do is people watch and bad mouth how badly your friends or celebrities dress. Then maybe you need to change friends. If you look at a program and all you see are soap operas and it’s making you cry and anxious. Maybe you want to consider not watching those. If you listen to certain music or play video games that is explicit or extremely violent with lots of gore. Consider not exposing yourself to it for a few weeks to a month and see how that makes you feel.

It’s a free country in most places. Media and movies and sporting events like hockey and football are made to be consumed and there are all kinds of content on Netflix or Hulu etc. Just like there’s freedom of speech in many countries or right for certain armed items to be carried you have a right to consume the media in your country depending on regulations. But do you really need to blatantly consume it and constantly expose yourself to it? In a sense you end up conditioning your mind and are programming and hypnotizing, and rehearsing and training your brain to certain things the more you expose yourself to it like a feedback loop.

We’ve seen dating gurus reiterate this focus and attention feedback loop and so in order for us to be elevated and smarter as a species just like Pavlov and the training bell and food stimulus experiments, the more we train ourselves that the world is bad and scary the more we are afraid or loss averse. We are like rats in a cage and conditioned to fear the electric shock or other negative response the more we are “shocked” and learn the world is sad and scary. Or that “we aren’t good enough”.

That’s the biggest programming issue most people also feel in the dating world. That they’ve been conditioned over and over that they aren’t good enough by their teachers or parents and mentors and people they look up to and then they accidentally little by little are beaten down and figure it’s true and it gets into their subconscious. It’s mind control, indoctrination, and quite prevalent to such an extent we absolutely don’t realize it. Certain cultures do it because it’s so ingrained but so do commercials and magazines about how our bodies are not perfect or that we have to be on this diet or have a six pack or marry a supermodel or fit in a dress or get married by age 21 and go to this school, and pass an SAT score, and then go to that school and have so many kids and get deployed into active service and… STOP. You have to short circuit the programming that is damaging and detrimental. The sooner you realize the better. And people have to learn to have backbone and stand up for themselves. And that’s why as Tai Lopez, and dating gurus, and self-help tapes and all these fitness people on occasion say. You have to watch not only what goes in your stomach for food, but what you’re FUELING your brain.

People starve for energy and food but there are many more that don’t realize their minds are in starving for information and knowledge and craving for attention, approval, and self-actualization.

We need to realize that yes people sometimes needs to shut off and decompress at the end of the day with mindless games and movies and comics and media from time to time. Heck, we even looked at some YouTube and songs and superhero things before writing this article. But on a day to day basis you must remember a few things if nothing else:

Life is not a straight path nor is everything also in black in white. We like to think we have full control of everything in our path but we come to this world naked and go back into the earth as dust and a lot is directed by parents, teachers, job, location, and who and where we are born. But again, you always have a choice. Like in the comics you can choose a successful helpful path, or a self destructive and harmful path to others. It’s all what you focus your attention to. School and education or is it conning and bilking people of money etc… or some middle ground?

Decide and choose and pick some paths, change and alter your course. Misjudged? Reorient and point the wheel and try again. The saying is that mistakes aren’t failure. And failures are fatal… usually.

Realize you have the ability to control your destiny. Change habits. Chart out your future today and plant the seeds for tomorrow. Tomorrow is not set in stone, today is the first day of many and the journey of a thousand miles begins with one step.

And don’t let any one person discourage you from pursuing what you want in life. Many people like actors, writers, and celebs have had doors shut in their faces and have had no said to them so many time that they don’t sweat it any more and are true professionals. The reason many of these peoples are experts are because they have so much experience and rehearsal and practice before the real event: “slow motion simulators” that when they actually experience the real even everything is on autopilot. Put yourself in a successful experience so you can experience success so that when the real experience, not fake, happens you’re ready. The saying is fake it til you make it and as Dan Lok said before he had put himself in a mindset of feeling success beforehand multiple times that when he actually got what he worked so long for and was asked what it felt like to have that he said it felt like nothing. It was just normal and had already become habit and an every day part of life. There was no excitement or crazy exuberance. Focus on success and make it a daily part of your life.

Have you had a positive life change or experience once you ditched a habit? Maybe you were addicted to magazines or food or had someone tell you weren’t ever going to be successful in something. How did you change your habit? What steps did you do to undo the broken record and break the chains holding back? If you have a great story we would love to hear about it and may anonymize it and feature it in another article.