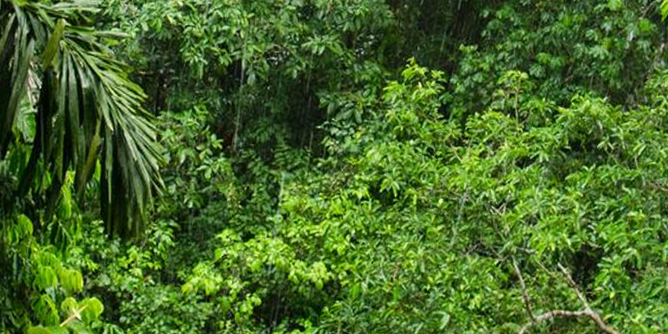 The Amazon rainforest is a humongous jungle that is in South America in the upper half of the continent. This jungle and forest is one of the largest and most biodiverse of the world. It borders parts of Peru and Ecuador and Venezuela and Columbia and other neighboring countries but is mostly in Brazil.

The forest has been on the planet for millions of years and due to its hot humid rainy climates has been home to many of the planet’s animal life, plant foliage and other floras and fauna. It is theorized that with the end of the giant animal age that a lot of the trees were able to grow uninhibited. Also with the changes during the Ice Ages and shifting of land and water masses the forest was able to survive and thrive through it all and form some of the most beautiful land and water masses in the region. Although some growth has changed and dropped over time there is a great biodiversity to the region.

The forest borders on many other regions covered by mountains and bordering parts of deserts. The region was flourishing for a long time but due to diseases brought by settles may have changed the landscape and populations.

According to Wikipedia there are over 2.5 million insect species and thousands of plants, birds, mammals, and reptiles. Any animal you can think of there are probably several hundred to thousands of species and this region has some of the highest life on the planet per square meter.

Unfortunately a lot of devastation and deforestation has happened due to people settling in the area. Many of the effects of fires, construction and expansion and excavation have irreversibly changed the region. For example many of the recent fires in the region are visible from space and sadly sculpting the land to the detriment of its resources and vegetation.

In order to prevent further change we need to constantly be vigilant to preserve this wonderful resource for this and future generations. The forests provide oxygen for the planet and destruction of these forests also increase carbon stores into the environment. Not only do the animals and people rely on this region for commerce, trade, food, and resources like wood, but they also live there and if people don’t actively preserve and take care of it some day there may not be a forest for us to enjoy. Theodore Roosevelt was famous for his love of the outdoor lifestyle. He helped greatly push for the conservationists ideas of preserving public lands and wildlife through many acts to strength the parks systems in the United States including establishing a Forest Service, several parks and national monuments through an Antiquities Act in 1906 according to National Park Service’s website.

There was a quote that kept recurring on The Andy Griffith Show, a comedy show about a small time sheriff and his deputy. It’s a quote that sort of ties into this. If we don’t do the right things today then we only have ourselves to blame if someday “somebody else might just be wearing that badge”. And it would like that “It Would Be a Shame If Something Happened to It” meme, simply a shame to see this treasured resource go up in smoke when we have the capability to safeguard it.

We leave you with this quote from Joni Mitchell – Big Yellow Taxi – “… don’t it always seem to go that you don’t know what you’ve got till it’s gone.” You can blame us for the song now stuck in your head, but maybe you’ll remember to treasure what you had like gold before moving on.