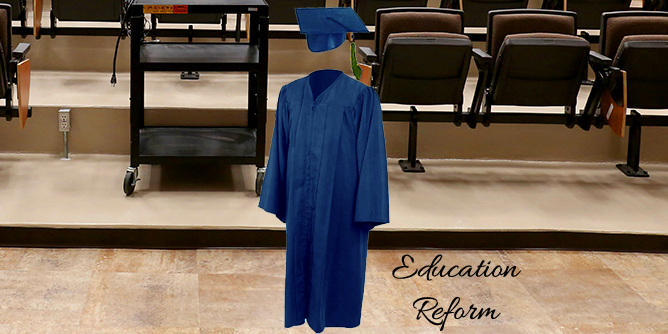 Thought of the week:
Educational reform.

Our current system teaches “rote memorization”. This is “rote” not “wrote”. The meaning of “rote” is that it involves basic memorization without use of intellect according to Merriam Webster and is “routine and habitual” and “mechanical” according to Dictionary.com. Do we really want to program our future people to become like little robots. It’s true that we all have to learn somehow and the first part of our lives we have no basis or formation of knowledge so we have to be basically plugged into the Matrix and spoon fed knowledge for a good part of our childhood. However the problem with this is that some people never wean off of this habit and line of thinking. It’s addicting, promotes laziness and complacency. We grow into the habit that everything is provided to us and everything is smooth sailing and don’t learn to think for ourselves.

Perhaps at some point we should start weaning kids off the “mother’s milk of spoon fed knowledge” and teach them the importance of:
– Questioning things.
– Working together with others in a team.
– Chiming in when they see something that needs to be said instead of waiting for someone else.
– Recognizing falsehoods.
– Coming to the help of others before someone asks.

These are very basic skills that a person needs to be “emotionally intelligent”. We teach a lot of mechanical repetition which is useful for medicine and math and science. But not everyone is going to be a scientist when they grow up. They are more than likely going to need to call out “B.S” when someone hassles them. They have to work together with other coworkers in any environment. And stand up for themselves and others when they see bullying or hostility. And they have to also recognize when someone is trying to defraud them.

One of my pet peeves when I was in college years back was going to my first group meet up where everyone was in a singing group or camp or get together and waving their hands as if in a trance. Something seemed not genuine in that environment or having not grown up in that environment because everyone was fake smiling and it seemed there was fake gratitude. And years later working at public facing job I’ve seen people that were not always as straightforward as it seemed. The happy go lucky jiving innocent blissfulness a lot of people feel is great, but they have to realize that the not everyone sees the world the same. And some people have other intentions to deceive, defraud, or commit ID theft, bilk, cheat, or other things to their own self-serving interests and will use your lack of knowledge, awareness or unfettered trust to better their own agenda. There is no problem with being genuinely happy and thankful, but when people are using that and acting like they are all tranced out and feeling no pain as if on Novocaine then the saying is beware of “Drinking the Kool-Aid”

We are not robots. We are not sheep. We are not made to be subservient or compliant if it does not make sense. There is a time and place for everything.