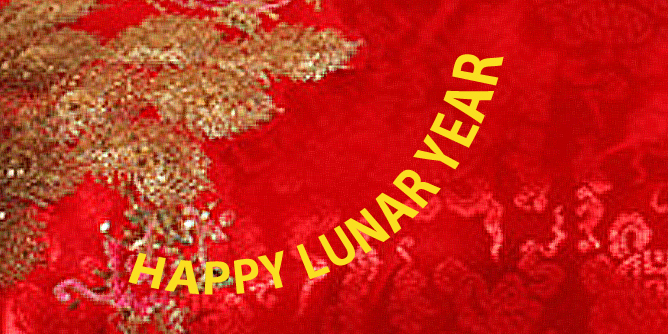 Xin Nian Kuai Le! If you have friends overseas or are from those participating Asian countries or even just interested in the culture you will be happy to know that Saturday, January the 25th ushered in the New Year based on the lunar calendar. Whereas the Gregorian and Julian calendars and other parts of the world use mostly a solar based calendar in determining time and years, some regions also have a calendar system that follows the wane and wax of the moon and ebb and flow of the tides.

Traditionally Lunar Year brings hope for a better year and continued and renewed chances for wealth, prosperity, time with family and also new better beginnings. Often people will travel home during this time and it is a huge event and time in many parts of the world. The closest comparison is to the traditional Christmas and holiday season in Western parts of the world.

People that work overseas or foreign students will save up and make the time and way to travel home and give gifts and generous items to wish one another well. Often they will make their way to see relatives, parents and family.

It is often a time that also embraces many lines of tradition, cultural beliefs and deep rooted superstitions. For instance, traditional superstition has many people cleaning and tidying up before the new year but not on or the few days after the new year including cooking for a few days. The belief with cleaning is that one doesn’t want to sweep or wash away the good luck and also with cooking, one gets to rest and not have any problems of cooking as one should have plenty of good food prepared around the Lunar New Year’s Eve to have prosperity and the idea of “plentifulness and abundance” carry into the new year.

Often meals will be large and sumptious and bigger than most other times consisting of duck, chicken, various seafood or fish, some vegetables of variety (perhaps snow peas and carrots for instance) and various other items like rice or starches. It is considered good luck to sample a bit of everything and have much left over for many days to spread out the feast and celebration and also aid in the fact of not needing to prepare more food during these days of festivities.

Prayer and food is also important as observances are done on certain days perhaps with abstinence from meat in certain parts and prayers, incense, superstitions on entering and exiting the house and fortune determination on best times to first leave the house for the new year. Some tradition also may include prayer with fruit offerings and candies which are later offered to the younger generation and still with the thought of preserving candies and foods for several days and not eating everything at once. As you can see, this culture is trained from an early age the importance of living a fun life combined with the diligence of saving and preservation of capital and wealth but not at extreme that hard work doesn’t get to see a celebration once in a while with family and friends.

Even the concept of money is passed down to the young as traditionally candy and money is also gifted from older to younger or married couples to the still single individuals. And that which is gifted is taught to safe for at least the first few days including choice parts of meats and other items so that good luck will carry into the new year.

Of course with new year also comes loud noises, and spectacle. Dragons, bright lucky reds and golds adorn many households including lanterns and other decorations. The fireworks are popped to scare away and keep away bad spirits which also being celebratory. It is very big business and one of happiness for the year. Often a lot of money is moved around around the days and also it’s recommended not to spend or do anything the first week of the year that you wouldn’t want to happen for the rest of the year as superstition.

Lately though there has been news of “coronavirus” that has been spreading and preventing a lot of travels and people trying to get home and see family and in terms of celebrations. This has created some headaches and difficulty for individuals and businesses.

We recognize this time of celebration and family and also sometimes get to partake in the festivities and activities. And if you do or are celebrating or observing may you have a safe and prosperous and wonderful year! Gung Xi Fa Chai!