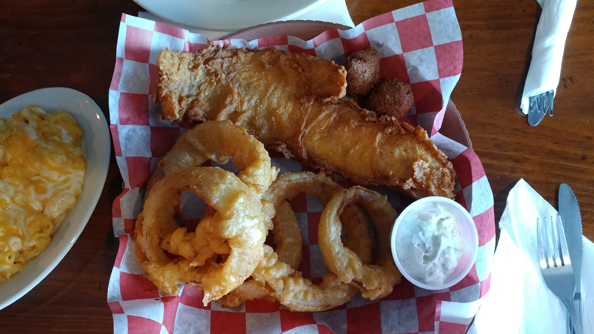 So, this is an older article that I never wrote but after flipping through some pictures on my phone I realized that the photos were still stashed away and what a better time to write this article than now?

My friend and I, we went at a relatively odd time of day. It was about 3 to 4 pm. Not quite lunch and not quite dinner. It was blazing hot outside. What do you do when you don’t really have anything to do and it’s too hot to go anywhere? Sometimes you go down the street to eat.

This place just happened to be down the street from us. It was a local restaurant that sort of looked like a hole in the wall and not like very much. You could drive right by the place easily but it was sort of a diner / bar. The inside had some country theme at the time I remember and various TV’s throughout the place. There seemed to be bar seating up near the front but we found some nice wooden tables near the side that was near the windows and the entrance road.

It wasn’t very busy actually and there was practically no one else in the restaurant because it was between meal time. I think there might have been one other person or so back in there. The waitress came and got us drinks and I ordered water with lemon and then we had plenty of time to just kind of peruse the menu and relax.

We chatted about nothing in particular and I think there were some table condiments I looked through and we talked about sports and movies and what to order. It was a very hot summer day and felt like 90 outside and we were just kind of tired from the weather and not super hungry until then. The decoration wasn’t really anything fancy just basic tables and chairs and plain walls if I recall.

I finally decided to order the pork chops with braised(?) broccoli and a side of mashed potatoes with gravy. They also had typical restaurant / bar faire but I had been wanting to change it up and also be sort of healthy and this actually was looking to be a decent change.

My friend ordered the fried fish and onion rings. I think we had asked what the special was for the day and this was what my friend happened to be craving and the waitress confirmed that it was very popular and had tried it as well and liked it. It came with a side of tartar sauce and a few hush puppies.

We also got us a side of mac and cheese to share. I had been somewhat confused on the sides and basically got multiple sides but it was okay because we finished it all.

Really, this restaurant was great because it had really generous portions of everything. The fish was big and crispy. The onion rings had just enough batter and crispness and oiliness to be satisfying. The fish was moist and tender and had flavor and was delicious even without the tartar sauce.

My charred broccoli had just enough flavor and salt without being wilted and was crisp and fresh and savory leaving me wanting more broccoli. The gravy was good and not overly heavy and just enough on the mashed taters without blending in with the pork chops slightly browned cutlets. It was tender and well done without being too dry or too tough. I enjoyed the presentation and the simplicity of the dish. The place was simply about food and not pretentious about it.

The bill was also reasonable and we both thought it was a good place. We debated who recommended the place first and my friend claimed dibs but I personally thought I was the genius who picked the place.

I think later we went back and played a board game and watched some TV. The food made us even more sluggish and happy and with it being so hot outside we didn’t really want to go anywhere.

I would recommend this place if you want to try something different.

Right now in 2020 a lot of places and dining out isn’t yet fully back to what it was and everyone is still social distancing, but when everything is back open again it’s a good idea to try new places and check out what’s in time. I miss eating out and exploring dives, drives and bars around town.

It had been a long time since I had pork chops and I enjoyed the tenderloins a lot. My friend definitely thinks the fish were some of the best in a while. Give this restaurant a try!