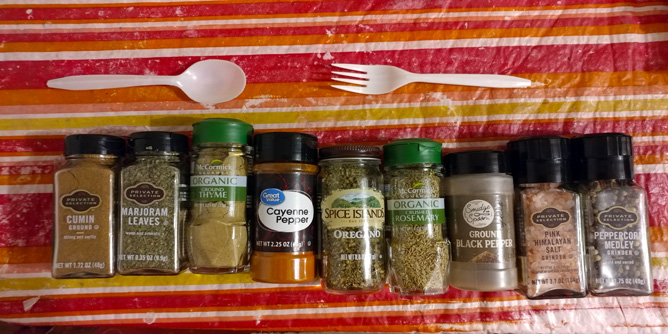 Growing up we didn’t have a lot of herbs and spices in our house on account of some allergies some of the grown ups had in the house. There were occassions that spices like curries were used, as well as, other condiments like spicy chili sauce and sweet sauces. But it was often just ketchup, maybe some relish and soy sauce in the house. No mustards, no tobasco sauce, no dressings. A lot of us had either ethnic upbringings that meant we developed our own style of food cooking and didn’t use a lot of bottled packaged items. We didn’t do much garlic or onion or ginger also partially for religious vegetarian reasons and also allergies. Although they were very welcome additions to otherwise bland meals.

One dish we had growing up was a ginger chopped chicken dish with cashews. Basically you took cooked or cubed fresh chicken to make the dish. You would start the heat on some a small amount of vegetable oil and maybe a touch of sesame oil and mix in ginger and let that flavor the oil and then mix in the chicken to stir fry and lastly the cashews until slightly brown. It was a flavorful simple dish to accompany otherwise simple rice dishes that we had often.

Sometimes for holidays we would have sardines with spice tomato paste. And there was barbecue sauce or ranch dressing every now and then to break up the monotony. But as we grew up and started eating more places and assimilating into the culture and cuisine that was cooked we started to learn more foods and flavors. I often miss the pork and black beans simmered in bittermelon. Or the tofu based dishes cooked in chicken or fresh tomatoes and soy sauce we had when growing up.

One day when having a dinner with my friend I realized that a lot of people grew up learning how to eat based on foods that their parents made and generations did before. Often they had no other food knowledge than what was put on the table before them and formed eating habits that didn’t cover the gamut of flavors and palettes around the world. The friend stated that their Korean friend that was a cook had taught them how to cook spices in butter first to draw out all the great flavors before tossing in the vegetables and that there was a method and timing to do this. Often a lot of old styles and cultures dictate the foods that were eaten and the first friend didn’t realize spices could make a dish taste drastically different with some simple additions. Many people are raised on white bread (which isn’t bad in itself) but there are so many different breads and multigrains, flax breads and bagels, pitas, and English muffins that variety should be the least of your concern.

Using herbs
Herbs are sometimes confusing, a bit expensive for those that are just starting out, and can easily spoil. That’s why it’s important to research a few recipes and what you can use them in before going out to splurge on spices.

You can often find fresh versions of spices versus the dried ones on the shelf in your local grocery store, but admittedly the fresh ones can make a big difference in the presentation and quality and taste of the food. For example, using garlic powder is drastically different than using fresh chopped or minced garlic.

Most herbs have a savory flavor or have aromatics that affect how your nose perceives the flavor of a particular food to be. If you’ve ever had a cold with a stuffy nose and couldn’t smell, you will notice that often the enjoyment of the food is gone because you can’t smell the food and thus can’t really taste your food. So smell is inextricably linked with the food’s flavor and taste profile.

To easily differentiate for cooking purposes the term herbs often refer to leafy green or flower portions of a plant why spices are usually from other parts of the plants such as the seeds, roots, and bark or other parts of a fruit. Cinnamon for instance is the bark of certain trees.

Those are just to name a few. It’s important to note that there are many more spices out there.

One great way to really spice up your meal is to try using spices in your recipes. Often herbs and spices are not just tasty and healthy but also can make your meal something to look forward to. A little bit can go a long way. And spices often pair well with meats but can also go well with fruits and vegetables.

One example of a dish that uses various spices and herbs is that of traditional gyros meat. Often it is made with beef and lamb and can be smelled blocks away down the street when it’s roasting. The most common spices and herbs can include garlic, oregano, marjoram, rosemary, thyme, black pepper, cumin, and salt. It’s a great way to use your various spices for a great flavorful dish.

In order to make the tzatziki sauce that is often paired with it, the best way to make from scratch is to have a yogurt sauce base prepared a day in advance made preferably of goat milk but you could also use sheep’s milk. Then you will add your cucumbers, dill, mint, garlic and salt and lemon juice. Some people like to kick in a bit of cayenne, olive oil, and touch of vinegar for extra tartness. Then they often garnish the sauce with a bit of parsley or mint on top. The sky really is the limit when making sauces and stews and meatloafs when you are working in the kitchen.

We saw trending on some internet news sites that because of the pandemic that more people are creating banana breads and discovering the joys of cooking at home and making their own charcuterie boards. This is a great way to teach your kids and teens and family to cook and also emphasize good health. Start early. Teach them about porportion sizes. For instance maybe a serving of meat being only a deck of cards and more vegetables taking up a plate.

Many exotic dishes use spices and herbs that most Americans don’t grow up cooking with such as anise, fenugreek, cumin, and hot spices. You’ve probably seen some people trying hot peppers on news TV shows and getting embarrassingly sick while others that grew up with hot foods have no problem with the spicier foods. Indian foods like massaman curry have cardamom, cinnamon, cloves, bay leaves, nutmeg, and mace often as well as chili peppers, cilantro, lemongrass, white peper, galangal and even shallots and garlic. It’s listed as one of the world’s most delicious foods but of course everyone has their own tast palates. This dish may have used bitter orange juice according to an old recorded recipe.

When traveling or going out to restaurants it’s always a great idea to try local foods. For example Korean foods have bimbap and kimchi while curry paste can sometimes have a coconut milk base, peanuts, fish sauce, and tamarind paste. I’ve found it fun and challenging when trying to cook for others or catering to try to mimic dishes that are difficult but rewarding and eye catching. Consider using ingredients that you’ve never tried before to bring out tastes that are rare in the normal dishes like umami and sour flavors.

Another example of cross cultural fusion happened for example during the Korean War according to Wikipedia. American troops were stations in South Korea as the article goes and traditionally the chicken was steamed or served in soups and broths. But when soul-food style American friend chicken started being sold there was the introduction of roasted and rotisserie chicken. Many modern fast food restaurants and franchises have experimented with fusion of foods and culture. For example P.F. Chang is often seen as a fusion of American and Asian foods foods. Anyhow, the Korean versions of the chicken started off with ginseng chicked that paired well with beer. So many flavors and cross overs and experimentation has happened with food over time.

Many foods came about as an accident and became big hits later. For example according to one lore cheese curls were originally created partly by accident when corn meal that was puffed up and flaked in a machine and used for animal feed. The extruder and heater made the damp corn puff up and an employee found it interesting enough that he decided to try to experiment with various seasonings. And years later it brought about many similar products till Cheetos became what it was.

Another food like yeast flakes or brewer’s yeast was found to be a byproduct of beer making and found to have B nutrients and thus became a food item.

Some other foods that have interesting lore include popsicles, chocolate chip cookies, and potato chips. For instance the modern potato chips where originally created in mom protest when a customer preferred thin and not soggy potatoes. The dish kept being sent back and the chef decided to cut it as thin as possible and fry then and coat them with a layer of salt in revenge but surprisingly it became a smash hit. What’s up doc right?

Thus with foods it’s always a great idea to try different combinations and let it be a learning experience. Tonight for instance give your chance to try a new vegetable like bok choy or rapini, or perhaps try an empanada or ratatouille.

With the new year it’s a good idea to watch your weight, try something new. Life as we know it has changed the way we eat. We don’t dine out as much due to travel restrictions now and it’s a UberEats and Door Dash world now. But we can try to make the dining at home more pleasant with different foods, herbs and spices. All it takes is a little investment over time in good cooking equipment and a little preparation and forethought.

For example for making tzatziki you might get yourself a grater or garlic press. Or you might want cheese cloth or a strainer for another recipe. For adding bay leaves you might need a spice sachet or sachet d’épice. Basically it’s a little teabag of spices that you can take out at the end of cookin without having to fish out all the spices out of a dish manually. Some spices like anise for example you might not want to leave in the dish or a bay leaf since it’s not really what you’ll be eating in the final product or it may be course, hard or inedible for other spices like cinnamon bark and cloves and peppercorns. Really you’re just trying to extract flavors in the least bit of space. Some food bloggers have recommended using coffee filters, tea filter backs and twine to make these throw away concoctions to save money and be more environmentally friendly. So use what you have, save money if you can and experiment.

The best cooks have had a lot of experience and practice and always learning better ways to improve their craft and make things faster, taste better and become more efficient whether it is mise en place to trying other techniques. Have fun and happy cooking.